Of Great Courage: “The Hiding Place” 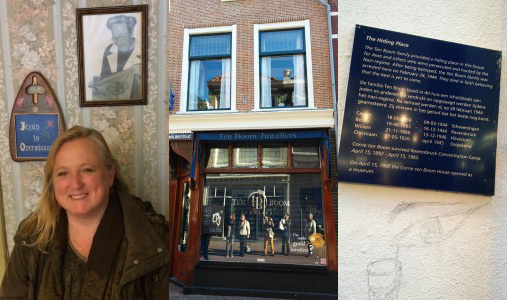 Yesterday I visited “The Hiding Place”, the house of Corrie Ten Boom, in Haarlem in the Netherlands. It is still there in the center of town, a museum of the past, a reminder of what could happen if we pretend nothing is going on. A reminder of great courage in a time when the world had gone crazy. The house is located in the center of the busiest area in Haarlem down the street from the police station, where the Nazi’s had their headquarters. Right next to them, a small family of believers saved 800 Jews during WWII. Great courage.

As I walked through the tiny rooms I was in silent awe that people had such courage to stand up for the Jewish people and help them, even at the risk of losing their own lives. Off course there were also others who helped. But in a country filled with people, most just turned their eye and did nothing.

In the small dining room of Corrie Ten Boom I told my testimony to a small group of people. I told them about our Jewish background and how we have had many dreams and visions of Jesus in the last years. I told them how incredible it is to find out that He really is the Messiah and is alive today. I think Corrie must have shed a tear from heaven as I testified in her own living room that many Jews were having dreams about the Jesus.

And then I looked at each of the lovely Dutch women who were with me. And I challenged them: “In this time and age… the world has once turned upside down again. The question is, would Christians today have the same courage to stand up for the Jews and Israel, at the risk of their own lives, even if they did not know Jesus yet? In Corrie’s time the Jews did not know their Messiah, but she respected them and helped them anyway. It takes tremendous courage to hide people in your own house. You risk everything. Not just your house, but imagine it also threatening your family? Your old father who lives in the house? Your sister? It takes tremendous courage to stand up for what you believe, especially if it risks the lives of your loved ones. And Corrie’s father did not make it. He died ten days after they were caught. Neither did her sister. She died in a concentration camp, together with the Jews she protected.

Today it feels like we are in 1938 again, slowly political leaders are turning against Israel, and the Jews all over the world are getting the blame for supporting their own country. Anti -Semitism has suddenly returned in full swing, but this time, it involves supporting a country, who fights for its survival. Don’t people in the world realize that if Israel didn’t fight for its existence, it wouldn’t be there.

In the years running up to WWII the world had gone crazy. But everybody just went around their business… hoping to keep the status quo… “as long as my life isn’t touched,” they said. Until it was too late. It sounds strangely familiar to today’s attitude around me. We see the evil around us growing but we don’t want to speak up, too afraid our European lifestyle will be effected. But not doing anything will just make it worse. We cannot tolerate evil and hope that our society stays the same. It won’t. I hear people in my Bible study saying: “it’s getting really close now.” Yes it is…. Do something about it.

As I was going through the little store in Corrie Ten Boom’s living room, I picked up a small booklet and flipped it open. I read only one line: “Not knowing is dangerous”. These words were written by Corrie many years ago. They are about the spiritual world, but also pertain to the physical world. Incidentally they were exactly the words I have been telling people in the last years. We cannot pretend we don’t know. It is dangerous. Not understanding what is going on in the physical and spiritual world is even more dangerous.

I walked up the tiny staircase and entered Corrie’s bedroom. There I saw the small hole in her closet that people had to go through to get to the tiny hiding place behind the wall. I was overwhelmed. Corrie’s bed was also still in the room… I could just imagine her heart beating as she was laying there, hoping the Nazi’s would NOT find the people. What love! What courage! I stared at the bed and the hole in the wall and wondered: “Would Christians today have enough courage to stand up for Israel? For the Jews?” What would you do if a gang of people attacked a Jew on the street just because he was Jewish and stood up for Israel ? Would you be afraid and run? Or would you take the man into your own house and hide him, at the risk of the whole gang coming after you and your family? It takes tremendous courage to help Israel.

May Corrie’s courage inspire us today. For it this type of courage that we need. May this be a call to all believers: “Have courage, do not fear. He is with you. Stand up for His people and His country, even if they don’t know the Messiah yet…. Show them His love. You have been grafted into the olive tree and are part God’s family now. Protect them, for the sake of the fathers. For the sake of God’s love and His eternal promises.”

If you want more information about the Corrie Ten Boom house in Holland and the possibility to visit there click: Corrie Ten Boom House
On the way home in the car I looked on facebook and saw something interesting on one of my Like pages. It is a page which teaches you a new Hebrew phrase every day. “ Incidentally” the phrase for today was: “HIDING PLACE”. Do you know how to say it in Hebrew? “SETER MISTOR”. 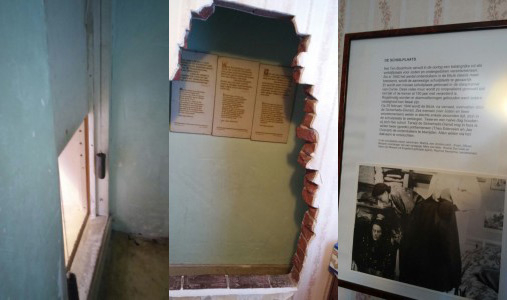