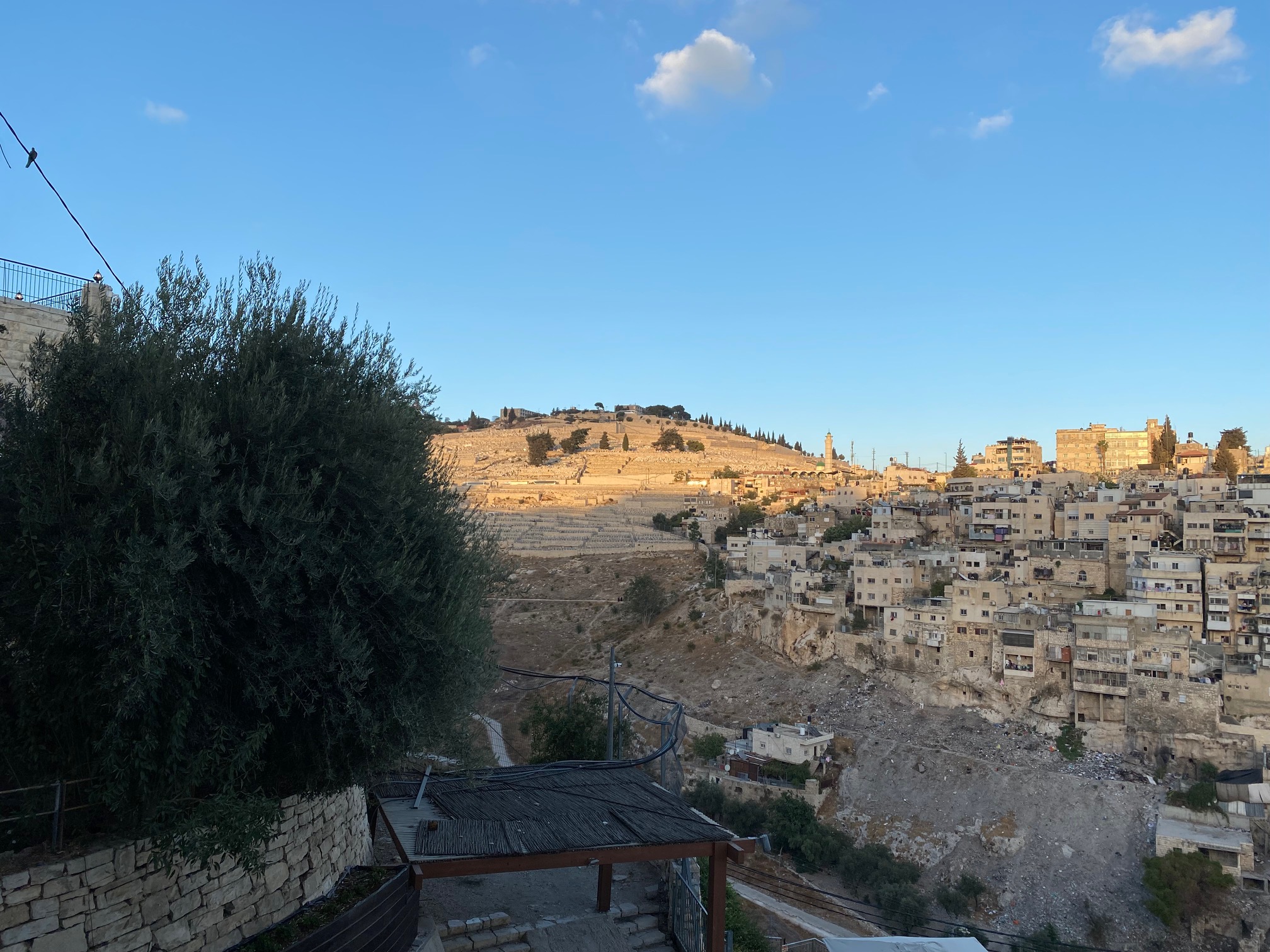 On the eve of the Feast of Trumpets the Lord had called us to blow the Trumpet in Zion, as is mentioned in Joel 2:1:

Blow ye the trumpet in Zion, and sound an alarm in my holy mountain: let all the inhabitants of the land tremble: for the day of the Lord cometh, for it is nigh at hand;

According to archaeologists, the original Mount Zion is the City of David, where David’s fortress stood. It was also Rosh HaShana eve and we had no plan for any dinner with friends. We thought we would quickly go to the City of David, blow the Shofar and find a bite to eat  when we returned. We had hoped to be with a group of people, but instead my husband Eliahu and I were alone. We both felt the Lord calling us to Zion. So without a plan, we did as He directed and set out for the Old City around 17:00 towards the Wailing Wall.

On the way, we ran into a friend from South Korea. She was on her way to blow the trumpet on the top of Mount of Olives, but couldn’t find a taxi, so instead she joined us. We were so happy that she was with us! When we arrived at the Wailing Wall it was very quiet, and most people were in their homes. The tradition of a Rosh HaShana dinner is actually a much later addition to Judaism, which came from Babylon, but it has become a big national holiday in Israel. In the Bible God only commands us to do three things on this day: Blow the trumpet, take a day of rest from work, and present an offering by fire to the Lord (Leviticus 23:24-25).

As we left the Wailing Wall, I bundled my shofar tightly so it wouldn’t be visible as we entered the City of David. It is a short walk, but part of East Jerusalem and overlooks the Arab village of Silwan, where many riots have taken place recently. The visitors center was dark and eerily deserted, except for a group of Palestinian men who were partying there. It was obviously not a safe place to be for two women and an Israeli at night, and especially not a place to blow the shofar!

We prayed and looked around for a safer place for us to go. Just when we almost gave up suddenly all the men got up and left! Praise God. We walked towards the edge of the visitors center and looked towards the Mount of Olives, where we heard worship music and many shofars being blown. But here on Mount Zion, it was quiet and just the three of us. It was almost seven in the evening, the time when the sun would set. We quickly prepared the shofar.

But then two young men came by with a small dog. They started playing with the dog right next to us (and keeping an eye on us) and the dog started barking and waking up all the dogs in the neighborhood! There was no way to make a video or hear the sound of shofar through all the barking! Again we prayed, and suddenly an old Arab lady came out of the house next door and started yelling at the boys that her dog was bigger than theirs and if they didn’t leave, she would send it after them! The boys obeyed and left, but one of them was watching us from the distance. Again we thanked the Lord for opening the way, and hastily got our phone and shofar ready. But right at that moment the Muslim muezzin started going off! Again we had to wait. It was getting darker, and we did not want to be there after dark. So we prayed again that it would stop.

Finally a few minutes past seven, the muezzin stopped, but the young men in the back were still watching us. But it was now or never. I grabbed the shofar and turned towards the Mount of Olives. Then we prayed and I blew hard and the sound echoed from the original Mount Zion over Silwan, towards the Mount of Olives. My husband and I were able to make a short film, with the help of my friend from Korea (On the video we look calm, but it was actually a tense situation). God gave us the strength. The sound of the shofar reverberated over East Jerusalem, from the original Mount Zion once again. Joel 2:1 fulfilled. We blew it from the exact spot, where likely David’s Palace stood, or even the Tabernacle of David. When the echoes stopped, we quickly packed up our stuff and ran out of there!

When we arrived home it was 9 in the evening. We were exhausted, exhilarated and very hungry. We had not eaten since lunch and I longed for a real Rosh haShana dinner. We came to Jaffa gate to look for food, and for the first time ever we saw that every single shop was closed. Never in my life had I ever seen it this way. It was partly because of the holiday, but also because of covid. No restaurants, not even a shoarma. I noticed one last shop keeper closing his doors and ran up to him and asked him if he knew where we could buy food. He shook his head  and said everything was closed. We turned around, disappointed that we had to go to bed on an empty stomach on such a Feast day.

Then suddenly the shop keeper yelled out to us: “Hold on, I have an idea. I am a single man and people take care of me and give me food. One hour ago a lady gave me a bag with a dinner in it. I don’t know what is inside of it but I don’t need it because I have enough. You can have it.” He sent a young boy to his apartment and within 5 minutes he came back with a huge plastic bag filled with containers of food! He gave us the bag and we tried to pay for it, but he refused and gave it to us for free.

Knowing God did a miracle, we walked back to our room and curiously opened the bag… Our mouths dropped open. It was an amazing cooked meal! A feast fit for a king, including lambs meat, chicken, rice, and middle eastern vegetable sauce. So delicious! I cried and thanked King Yeshua for taking care of us. We ate the dinner fully aware that He had supplied all our needs and had even given us a complete Rosh haShana dinner for free.

Remember, when God gives you a calling, have faith, obey, pray and he will also open the way for you, and supply you with everything you need.