In 2019 a Passover miracle happened in Amsterdam and in Israel. The Lord took me on a journey of faith from Amsterdam to Israel. It started with a great Passover celebration in which we claimed the victory of Jesus and ended on top of the mountaintops of Israel proclaiming his victory.

A few months before Passover 2019 I had prayed out loud: “Lord, where do you want to celebrate Passover this year?” Two days later I woke up from a very clear dream in which God asked me to go to Arleen Westerhof at Gods Embassy and ask her to celebrate Passover there. Miraculously, within a few days I was able to speak to Arleen and tell her about the dream. She prayed and discussed it with her board and after a few weeks agreed. We wondered why this Passover was special and noted it fell on the same day as Good Friday and that this was Amsterdam, the capital of Holland, next to Amsterdam Arena. In the Bible Passover was often a start of revival, was revival coming here? The truth is, I didn’t know why the Lord wanted it here. It was a matter of obedience without knowing the whole picture. I knew he had spoken and that was it. 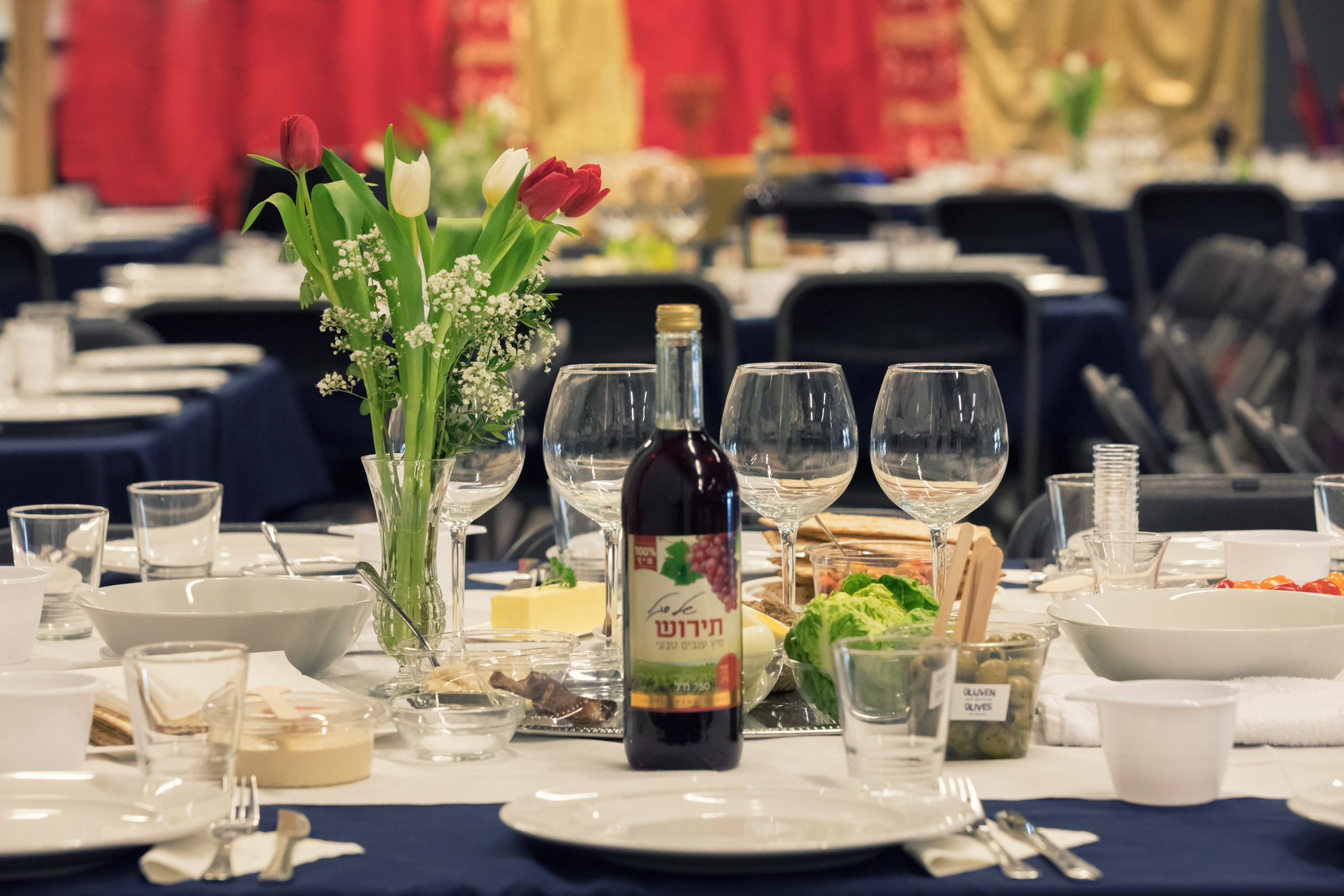 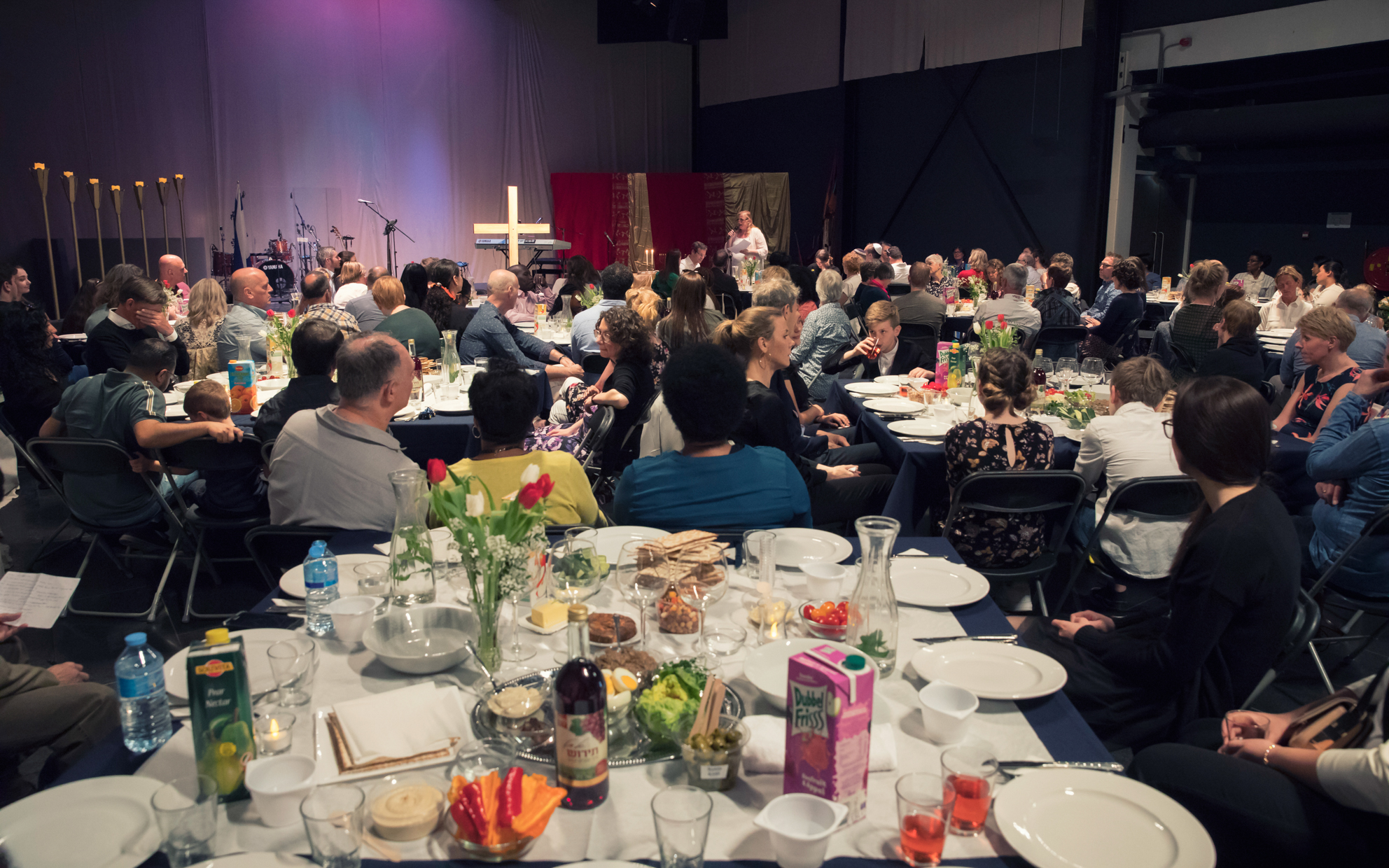 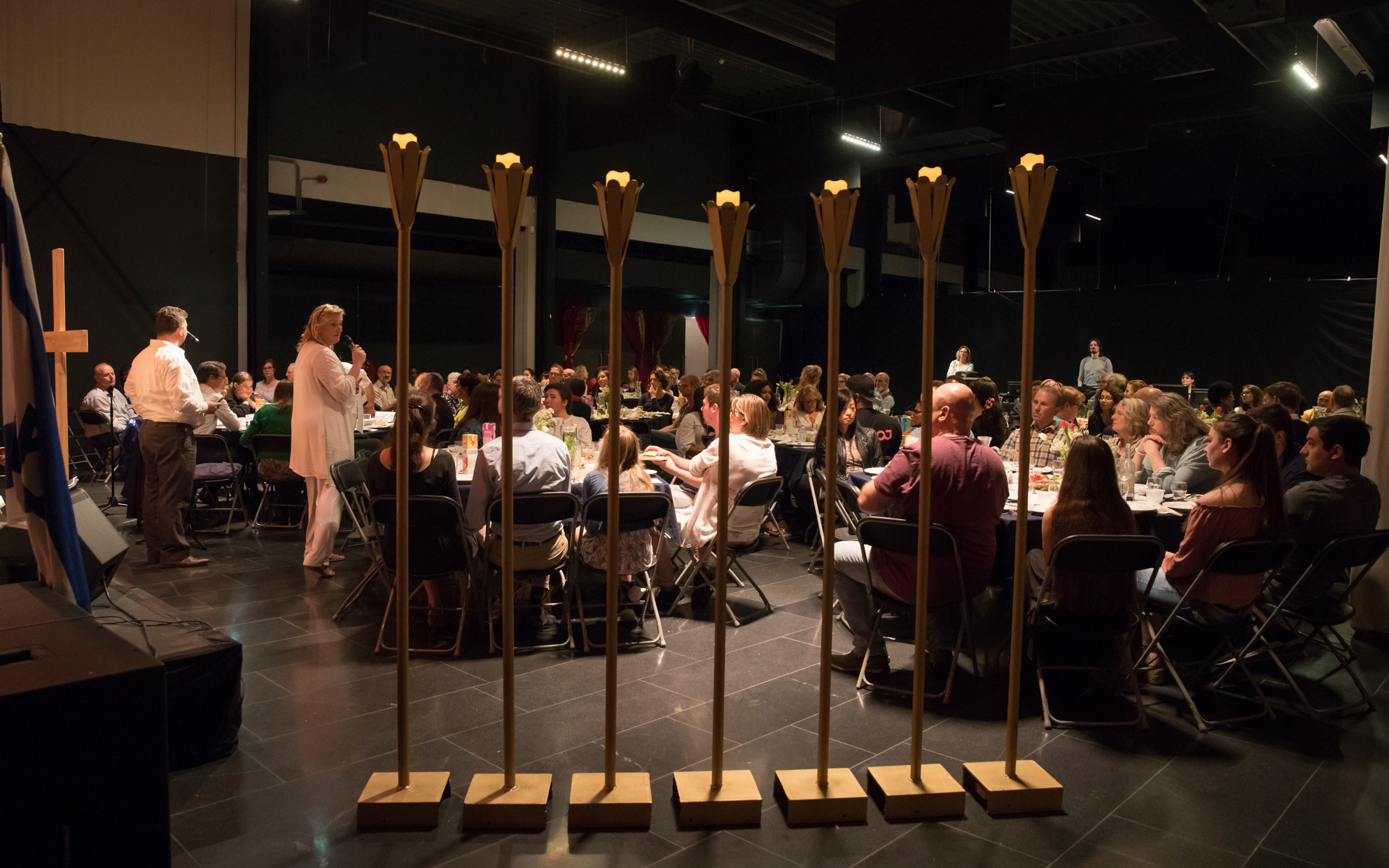 Since this was a large church, there was so much to organize and very little time. The Lord kept saying to me, he would arrange everything and I had to trust him. He even gave me the theme in a dream: “Claim & Proclaim his victory. Drink this cup with him.” Three weeks before Passover I spoke in the church and invited the congregation to help. Again, the Lord gave me the words to say in a dream, including that this would become the real embassy of God in the Netherlands. After I spoke the words the Lord told me, amazingly 35 volunteers registered to help, including people who could help organize the event and the music. The building was ready, and felt like a real upper room.

On the 1 Nisan, 14 days before Passover I had a dream that I saw the Passover at God’s Embassy and I saw the people with little plastic bags in their hands filled with water and a goldfish. Then the Lord spoke and said go up to the mountain of the Lord to prophecy victory and He said: “I am giving you the keys to the kingdom. Bind and loose and prophecy”. Later I heard him say “Your church will become a landing spot for the Holy Spirit.” 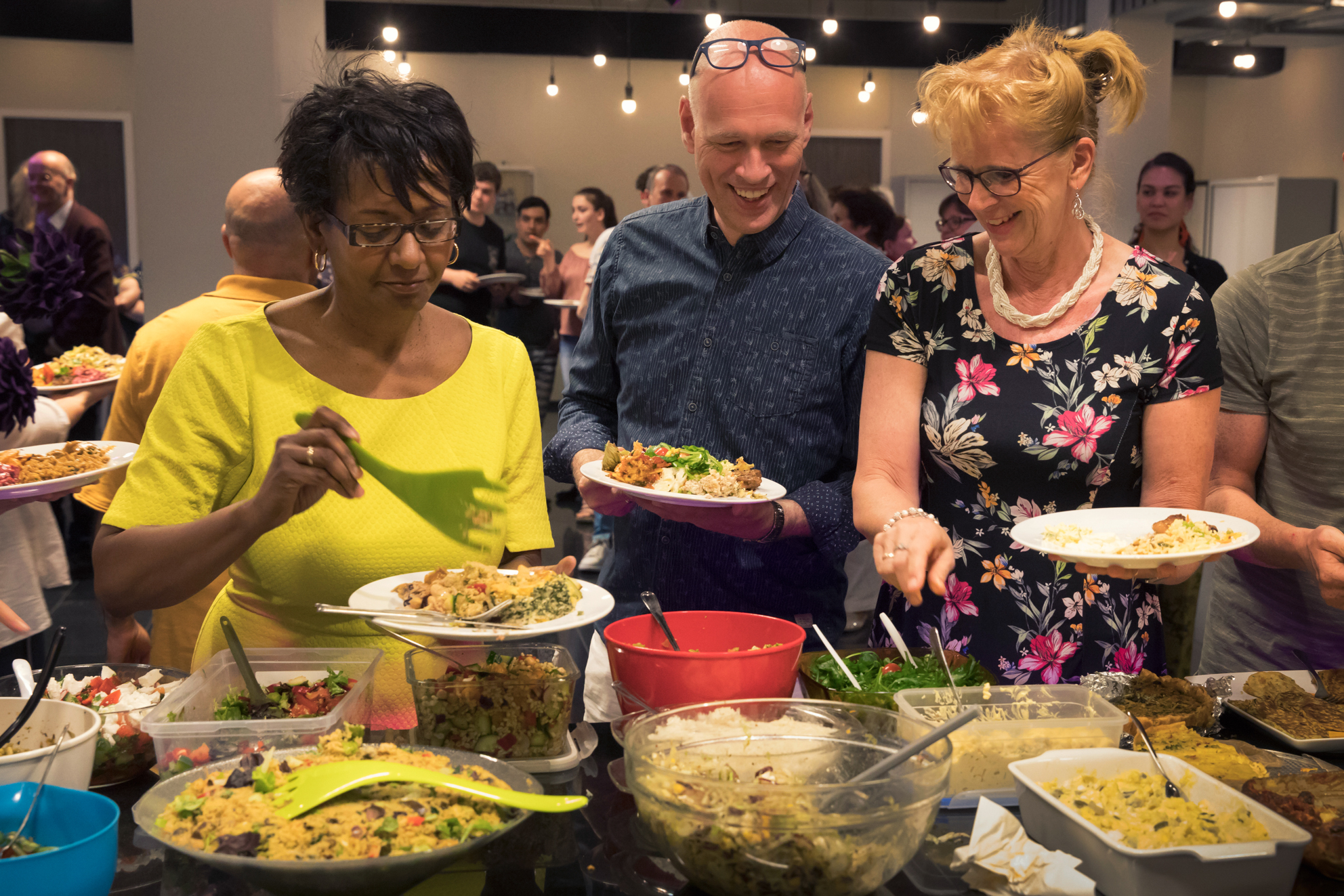 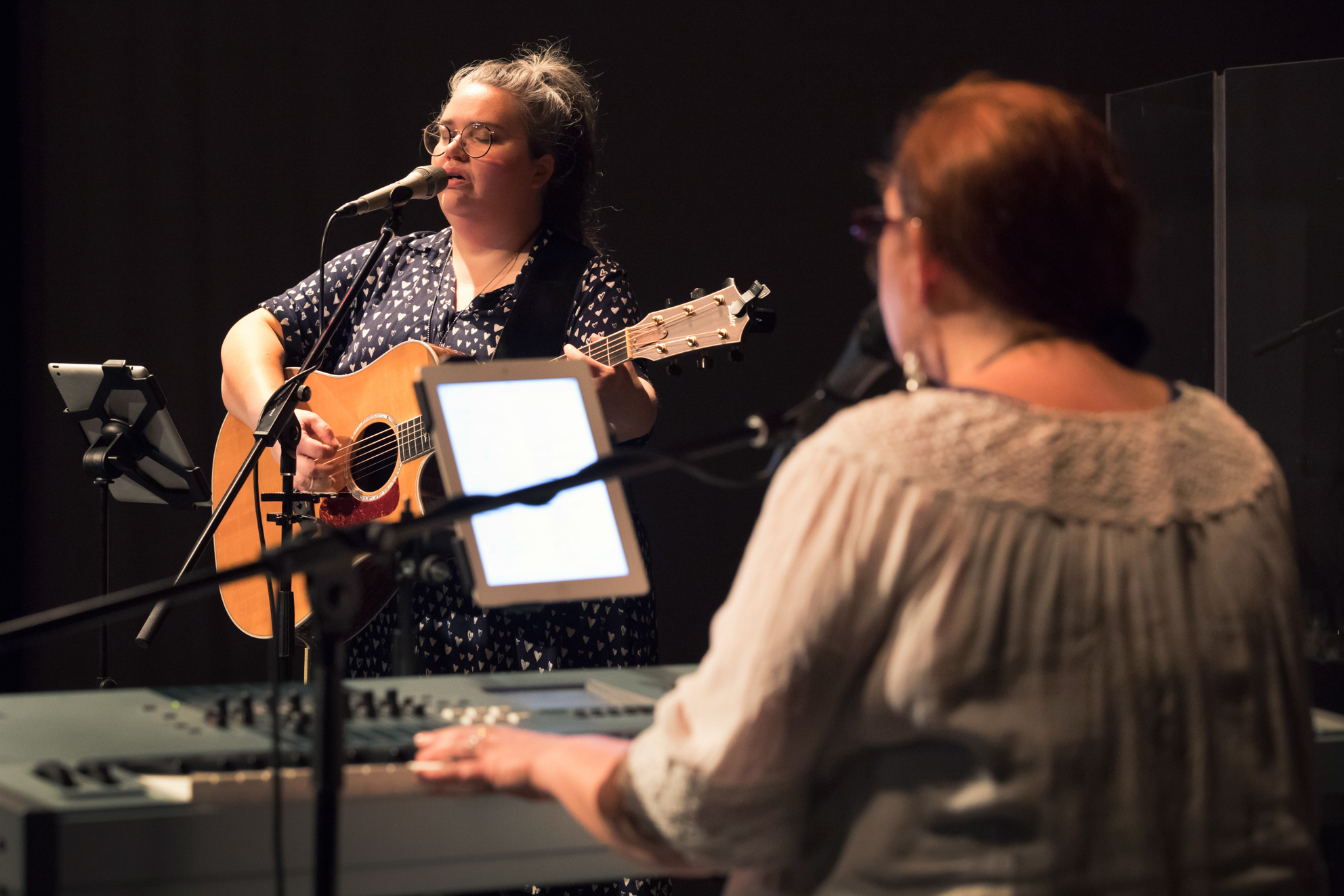 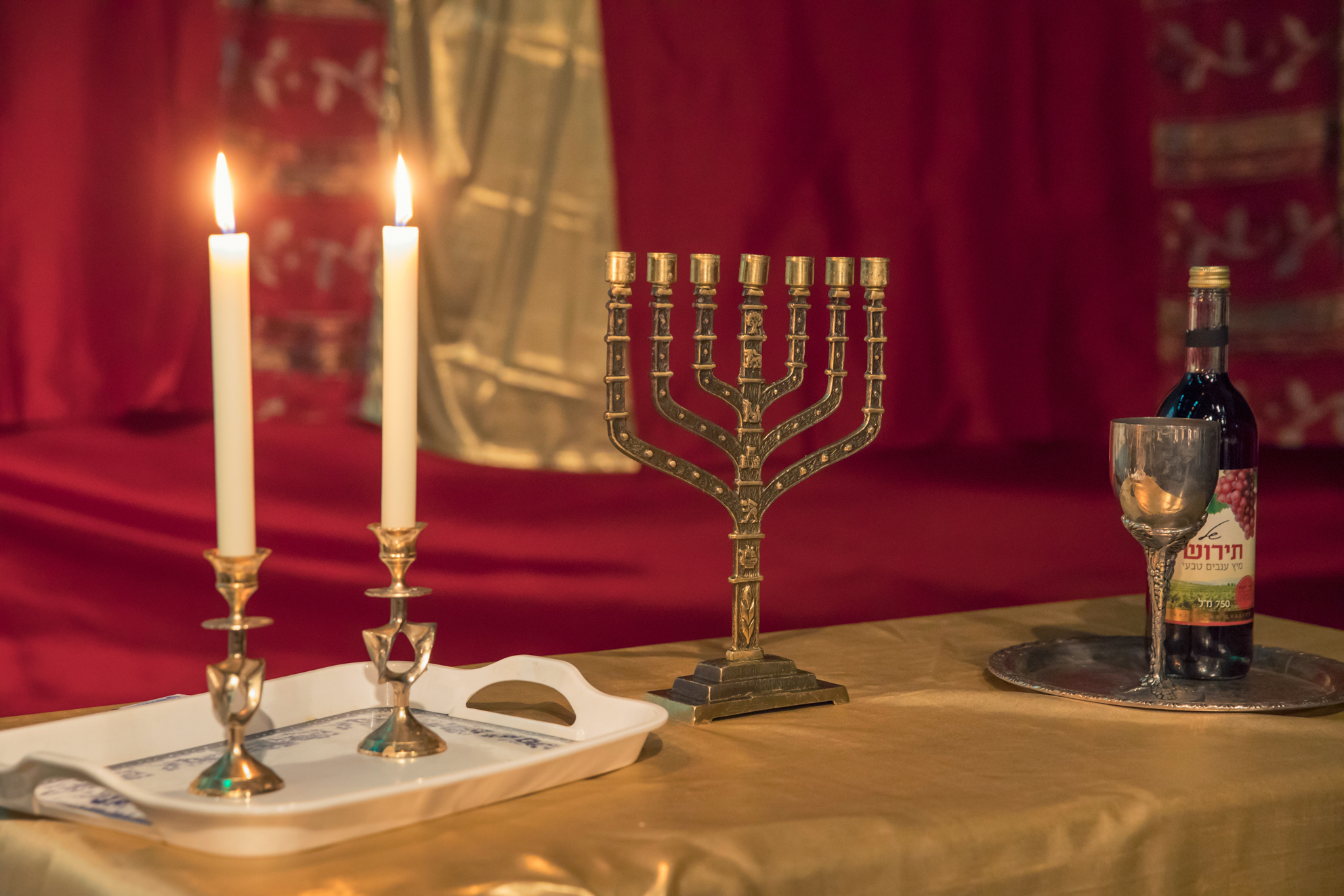 The Passover was amazingly beautiful and together with 140 people we proclaimed the victory of Jesus over the Netherlands, Europe and Israel. The next morning I had a vision of a pin being dropped from heaven to earth. And when it landed it caused a resonating wave circling on the earth from the pin outwards. I also saw the mountain of the Lord where man encountered God and met him face to face. 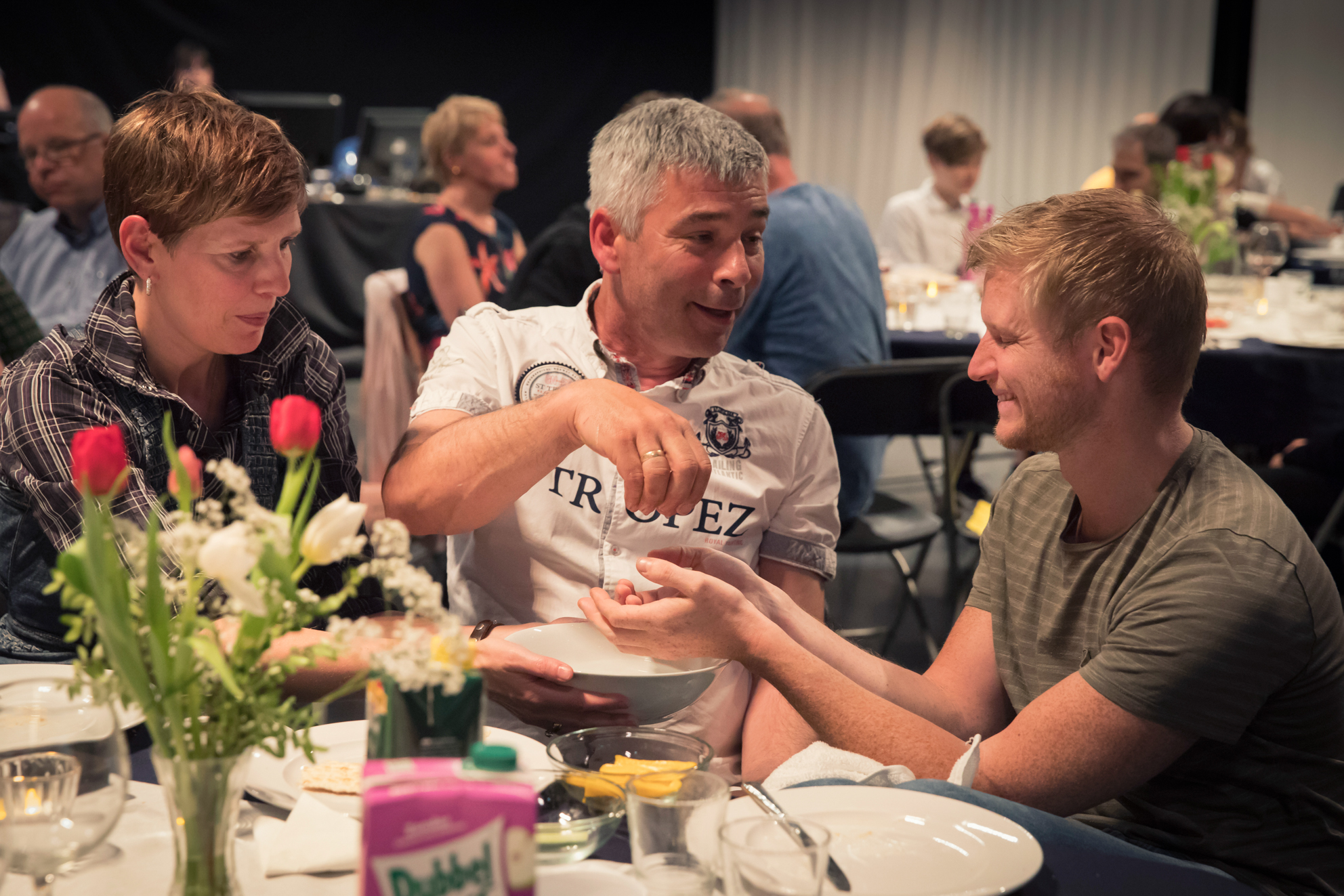 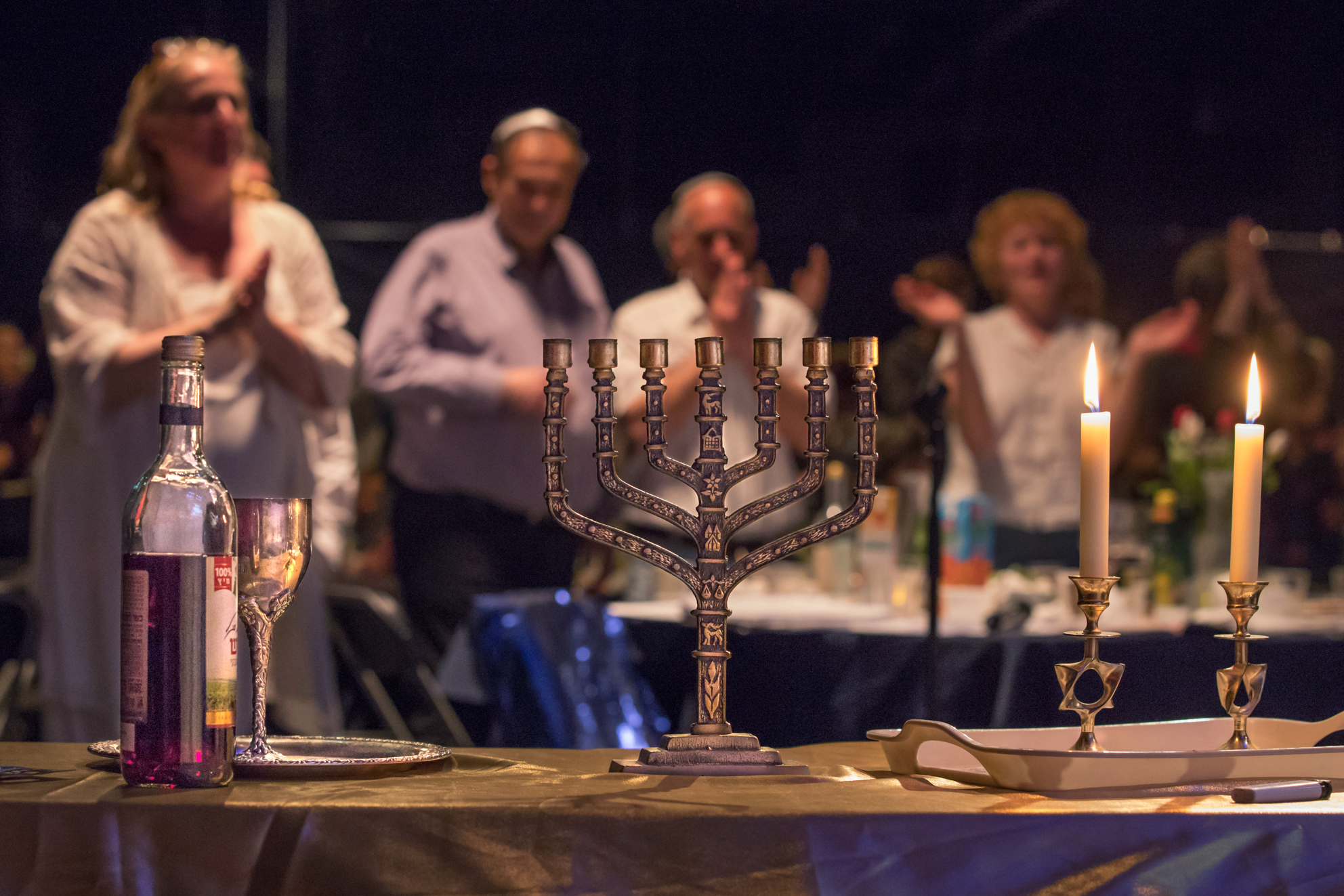 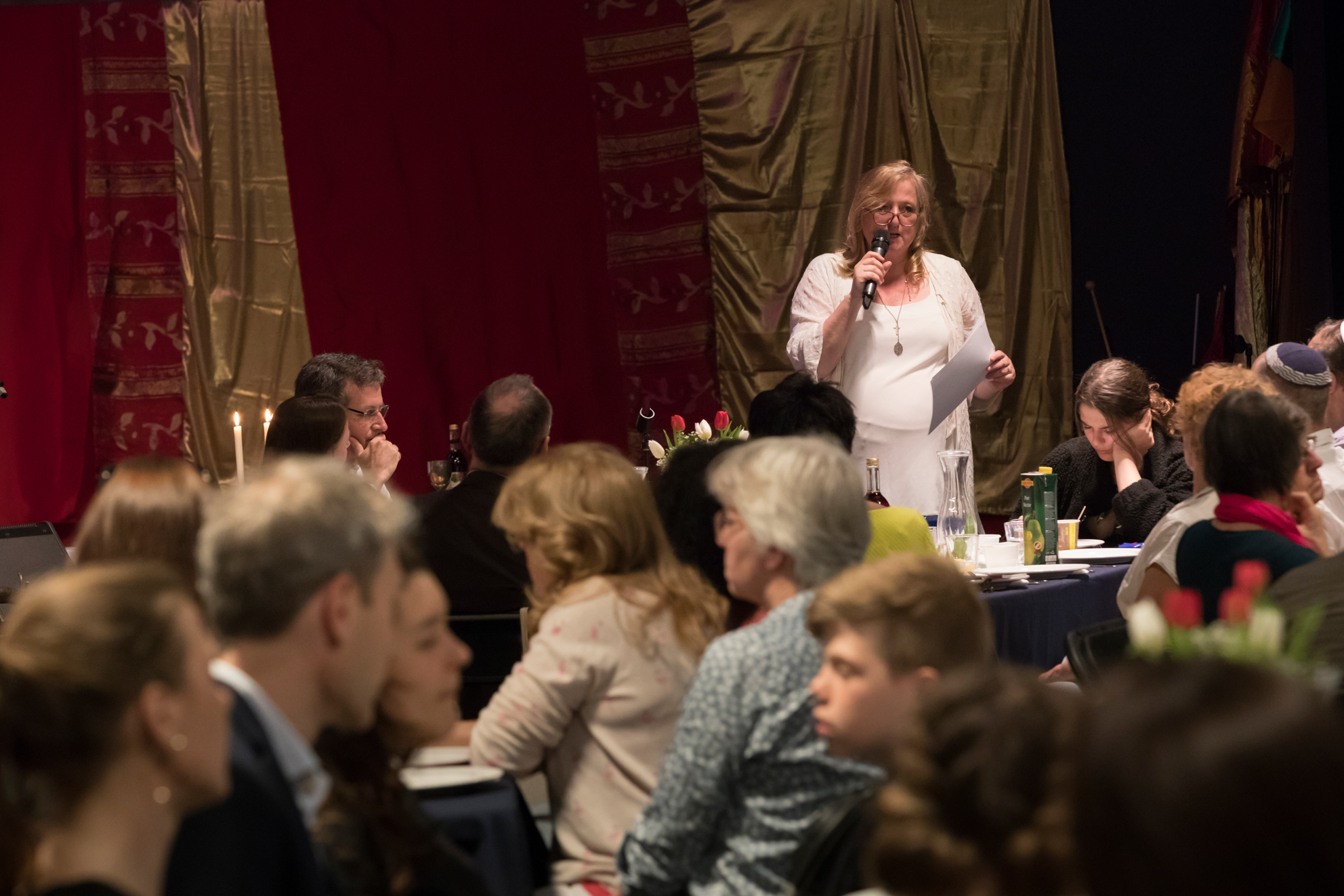 Two days later, on resurrection morning, God showed me Joshua 1:11 where it says:

“Go and prepare your things, for in three days you are going into the land.”

The timing was incredible, because I was going to Israel in three days and I had not yet been able to prepare. I felt like we were living in the Biblical story of Joshua who also celebrated Passover and then went in to take the Promised Land, to claim the promises God had given him.

Three days later I was in Nazareth to film the kids TV program De Diamant. In Nazareth I had a dream that Jesus asked me about the spiritual meaning of Nazareth. I discovered that from Nazareth the beginning of hope started for Israel. On that Friday evening, the seventh night of Passover, we were invited to an Arabic evangelical congregation at the foot of Mount Precipice (the Mountain where there tried to throw Jesus off 2000 years ago). Because of the orthodox calendar they celebrated Good Friday a week later and so I was able to celebrate Passover on Good Friday for a second time! They even sang the same song as we had in Amsterdam: The Via Dolorosa. The next day, the 8th day of Passover, the day according to the Hebrew calendar that Joshua started going around Jericho, we stood on top of Mount Precipice and had communion and proclaimed the victory of Jesus over Nazareth: A new hope was beginning for Israel.

The next day, we went to the top of Mount Tabor (the Mountain of Transfiguration) and I stood upon this mountaintop, overlooking the north of Israel and prayed and prophesied over the north. Then on the third day that Joshua went around Jericho, we went to Bethlehem. Out of the blue our cameramen met the major of Bethlehem and he allowed us to go to the top of the municipality building… another Mountaintop! At 12:00 we were miraculously on the highest point in Bethlehem proclaiming the victory of Jesus! That evening, we were at Mount Zion and the wailing wall, and I cried for the amazing things God was doing. The next day we went to the Mount of Olives. We were not able to film where we wanted, and instead ended up next the Church of the Ascension, the exact spot where they say Jesus went to heaven and is coming back. And again I prophesied the victory of Jesus. 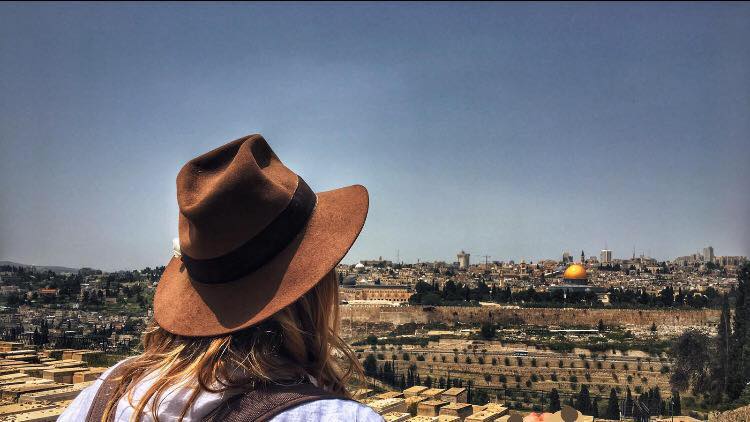 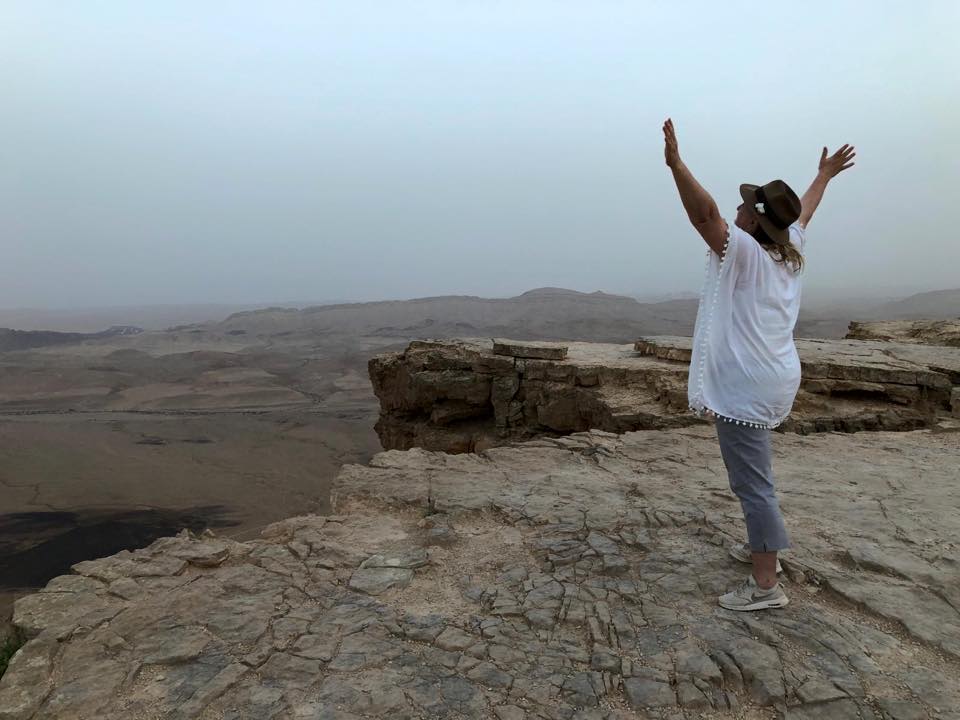 We continued our journey, and passed the city of Jericho on the fourth day that Joshua went around the walls (according to the Hebrew calendar). I waved to the city of Palms. Goodbye Jericho, you are finished! Jesus already won the battle at the cross and was victoriously entering the Promised Land. The next day we went to the Negev desert and proclaimed the victory of Jesus from the top of Mitze Ramon. I had another dream there, and saw an ancient city on a hill with water was flowing through the city from top to bottom and also heard the word “giants”. I realized the last part of doing around Jericho must have been the hardest. 7 x 7 going around a city without seeing results. Walking by faith, knowing God had spoken and obeying no matter what. Praying and prophesying for the giants to be defeated. Singing and proclaiming Jesus victory!

On the seventh day of the story of Jericho, I went to visit a messianic congregation in Tel Aviv. As the sun set over Tel Aviv I ended up praying for people seven with cancer. God is louder than the thunder. He has the victory. Spiritual walls fell. That evening I was on one of the highest points of Tel Aviv! And from this mountaintop together we prayed over Tel Aviv.

When I got home I heard the Lord’s voice in my sleep:

“I am praying for rivers in high places to be released”.

Let’s pray that rivers of the Holy Spirit will be released in all those high places over all those cities: Amsterdam, Nazareth, Mount Tabor, Bethlehem, Mount Zion, Mount of Olives, Mount Ramon, and Tel Aviv.

Praise God for what He is doing!