Dreams in the Bible

The Bible mentions that God speaks through dreams and visions. While we are asleep He gives us images and messages in our sleep. Visions happen when we are awake. However, I have come to believe that there is fine line between them. There are scholars who say that over one-third of the Bible happened through dreams and visions and in more than half of the prophetic works God spoke through them. 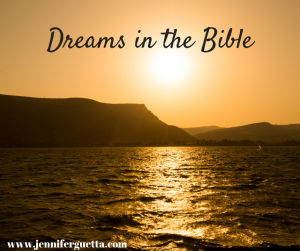 In both the Old and the New Testament God spoke many times through people while they were asleep. In fact, many of the stories in the Bible, where God intervenes in man’s lives, happened through dreams. Many of the divine encounters that we speak about as if they are stories actually happened while the people were asleep. The story starts and ends with: “and he was asleep,” or “as he woke up”. Job 33:14-16 specifically states that God speaks through dreams to preserve them from the pit.

For God does speak—now one way, now another— though no one perceives it.
In a dream, in a vision of the night, when deep sleep falls on people as they slumber in their beds, he may speak in their ears and terrify them with warnings, to turn them from wrongdoing and keep them from pride, to preserve them from the pit, their lives from perishing by the sword.
(Job 33:14-18 NIV)

When we started having dreams, there were not many people that understood what we were going through. We started looking for answers and I was amazed to find out that the people in the Bible had gone through the same thing! God intervened in their lives through dreams.

Here are some examples of dreams in the Bible:

When God promised Abraham a son He spoke to him in a vision “After these things the word of the Lord came unto Abram in a vision.” (Genesis 15:1). Afterwards Abraham fell into a deep sleep and God showed him more things about the future of his people. In the same dream the Lord made a covenant with Abraham promising to give him the land (Genesis 15:18). God’s promise to the Jewish people happened through a dream!

And when the sun was going down, a deep sleep fell upon Abram
(Genesis 15:12 KJV) 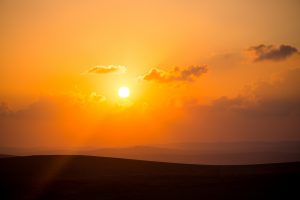 In Genesis 28 we read the story of Jacob stopping in Bethel on his way to the house of Laban.

“And he dreamed, and behold a ladder set up on the earth, and the top of it reached to heaven: and behold the angels of God ascending and descending on it. And, behold, the Lord stood above it, and said, I am the Lord God of Abraham thy father, and the God of Isaac: the land whereon thou liest, to thee will I give it, and to thy seed”

God promises Jacob in a dream that he will return to this land and that the land was his. A great promise! When Jacob wakes up, he did not question whether the dream was from God. It says:

“And Jacob awaked out of his sleep, and he said, Surely the Lord is in this place; and I knew it not.”

He then sets the stone which he had used as a pillow upright and anoints it with oil, saying this place was the house of the Lord, a place between heaven and earth (Genesis 28:11-22 KJV). Can you imagine doing that after having a dream? Jacob knew without a doubt that this dream was from God and that it was a real promise. After many years of hard work for Laban, God showed Jacob, in another dream, a way to divide the flock and receive his own rightful portion. In the same dream God tells Jacob that He was the God that had spoken in his dreams in Bethel and told him to return to the land. Jacob obeyed the God who spoke in his dreams and left. Later Laban came after him and also had a dream from God saying: “Take heed that thou speak not to Jacob either good or bad.” (Genesis 31:11-24 KJV). 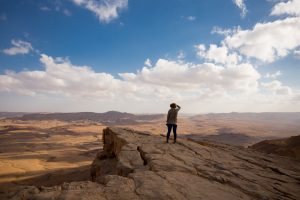 In the story of Joseph there are many dreams. Joseph had dreams about his own future and his family, the Pharaoh had dreams and the Pharaoh’s butler and the baker had dreams. These were mainly prophetic dreams, in which God showed or warned about the future (Gen. 37-40). In Judges 7:13-15 we read the story of how Gibeon is encouraged about his coming victory over the Midianites by overhearing an enemy soldier speak about a dream he had. In this way, God encouraged Gideon by giving someone else a dream.

And it was so, when Gideon heard the telling of the dream, and the interpretation thereof, that he worshipped, and returned into the host of Israel, and said, Arise; for the Lord hath delivered into your hand the host of Midian. (Judges 7:15 KJV)

When Solomon became King, he went to Gibeon and God appeared to him IN A DREAM (1 Kings 3:5, 2 Chron. 1:7). While Solomon was sleeping God asked him “what shall I give thee”, and while he was still asleep Solomon answered God and said he wanted wisdom. Then God was pleased and gave him much more than he requested. Only after this entire conversation does the Bible say that Solomon woke up. “And Solomon awoke; and, behold, it was a dream” 1 kings 3:15.

In Gibeon the Lord appeared to Solomon in a dream by night: and God said, Ask what I shall give thee. (1 Kings 3:5 KJV) 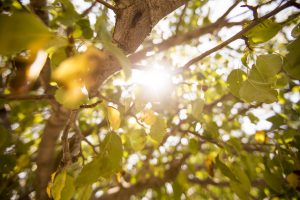 The Lord spoke again to Solomon after he had inaugurated the Temple. “And the Lord appeared to Solomon by night, and said unto him, I have heard thy prayer, and have chosen this place to myself for an house of sacrifice.” 2 Chron. 7:12.

God often spoke to the Prophets through dreams.

In the book of Daniel, we read that both Daniel and King Nebuchadnezzar had dreams, and that God used Daniel to interpret Nebuchadnezzar’s dreams and showed him the future.

In the first year of Belshazzar king of Babylon Daniel had a dream and visions of his head upon his bed: then he wrote the dream, and told the sum of the matters. (Daniel 7:1 KJV)

Many of Ezekiel visions happened during dreams in his sleep, and interestingly they also happened around the 1st or the 5th of the month.

Dreams in the New Testament

In the New Testament God continues to speak to His people in the same way through dreams to tell them about the Messiah, to warn them and to encourage them. When the Messiah was born God spoke to many people in dreams, just as He had done in the Torah. The three wise men that came and visited Yeshua were warned in a dream not to go back to Herod (Matthew 2:12). Joseph of Nazareth had four dreams from God. One in which an angel came to him and told him not to be afraid to take Mary as his wife, and that she was pregnant from the Holy Spirit (Matthew 1:20-24).

Then Joseph being raised from sleep did as the angel of the Lord had bidden him, and took unto him his wife. Matthew 1:24 KJV

Joseph did not doubt that his dream was from God and obeyed what God told him. In the second dream, an angel of God appeared to Joseph again and told him to flee to Egypt (Matthew 2:13). Then when Joseph and Mary were in Egypt, the Lord appeared again to Joseph in a dream and told him to go back to Israel (Matthew 2:19). Then Joseph had another dream in which God tells him to withdraw to the Galilee (Matthew 2:22).

If God spoke to people in the Bible through dreams, and God is very real and still the same today, then He can still speak through dreams today as well. The prophet Joel prophesied (Joel 2:28) that in the last days God would pour out His Spirit on all flesh and your old men will dream dreams.

And it shall come to pass afterward, that I will pour out my spirit upon all flesh; and your sons and your daughters shall prophesy, your old men shall dream dreams, your young men shall see visions.
(Joel 2:28 KJV) 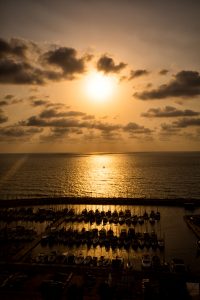 God is the same yesterday, today and forever. He still speaks in dreams today. However, it is important to distinguish where your dreams are coming from.