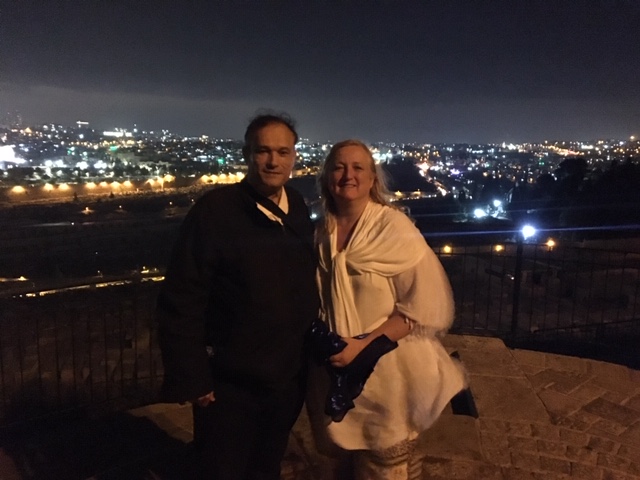 On the Feast of Trumpets, in the year 5780 (2019), we were on the Mount of Olives with a small group of believers. From there we blew the Shofar, proclaimed Yeshua’s victory and called out “Baruch ha ba be Shem Adonai Yeshua.” (Blessed is He who comes in the Name of the Lord, Psalm 118:26, Matthew 23:39). We broadcasted live to Woerden in the Netherlands, where there was a great celebration with 200 people. There is Hope! God is doing great things in Israel and the Netherlands.

Here is a report from the feast in Woerden, the Netherlands (Anja Adams):

Shana Tova it is the new Jewish year 5780.
“Welcome to the 2019 Feast of Trumpets” it said in large letters on the projector. The room was beautifully decorated with meaningful colors, rugs and flowers. The coffee, tea and a buffet were ready.

Leviticus 23: 24 and 25
“Speak to the Israelites, God said to Moses, in the seventh month, on the first day of the month, you must have a day of rest, a day of remembrance … announced by a trumpet call, a holy meeting …”

This day of reflection, waking up, blessing, prayer and praise, began with the blowing of the shofar. The blowers came in and blew 25 times, the sound provided by God himself sounded like a prayer and a call by God but also a warning, be prepared as a pure bride for God and.. as a triumph, Yeshua is coming!! 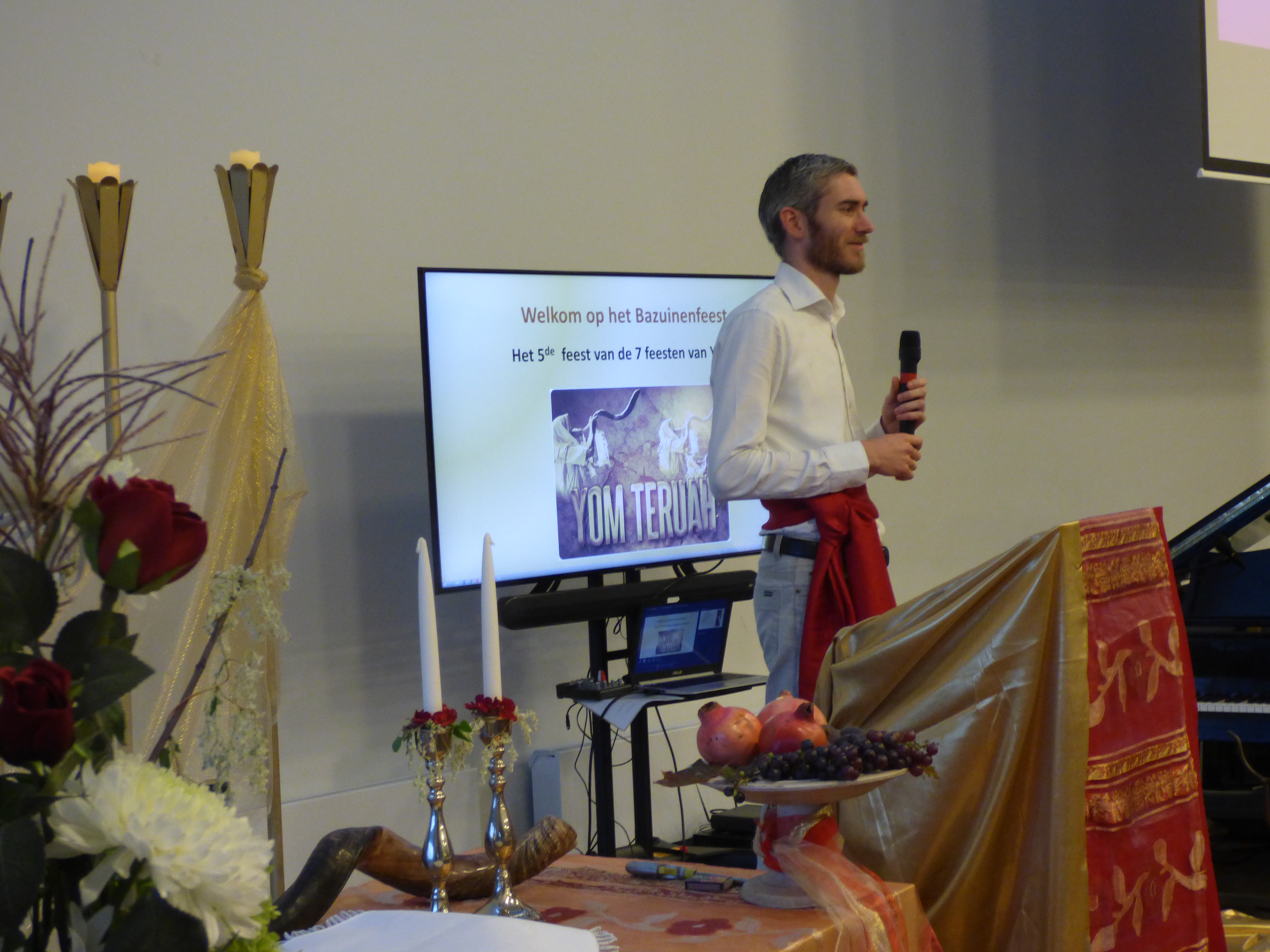 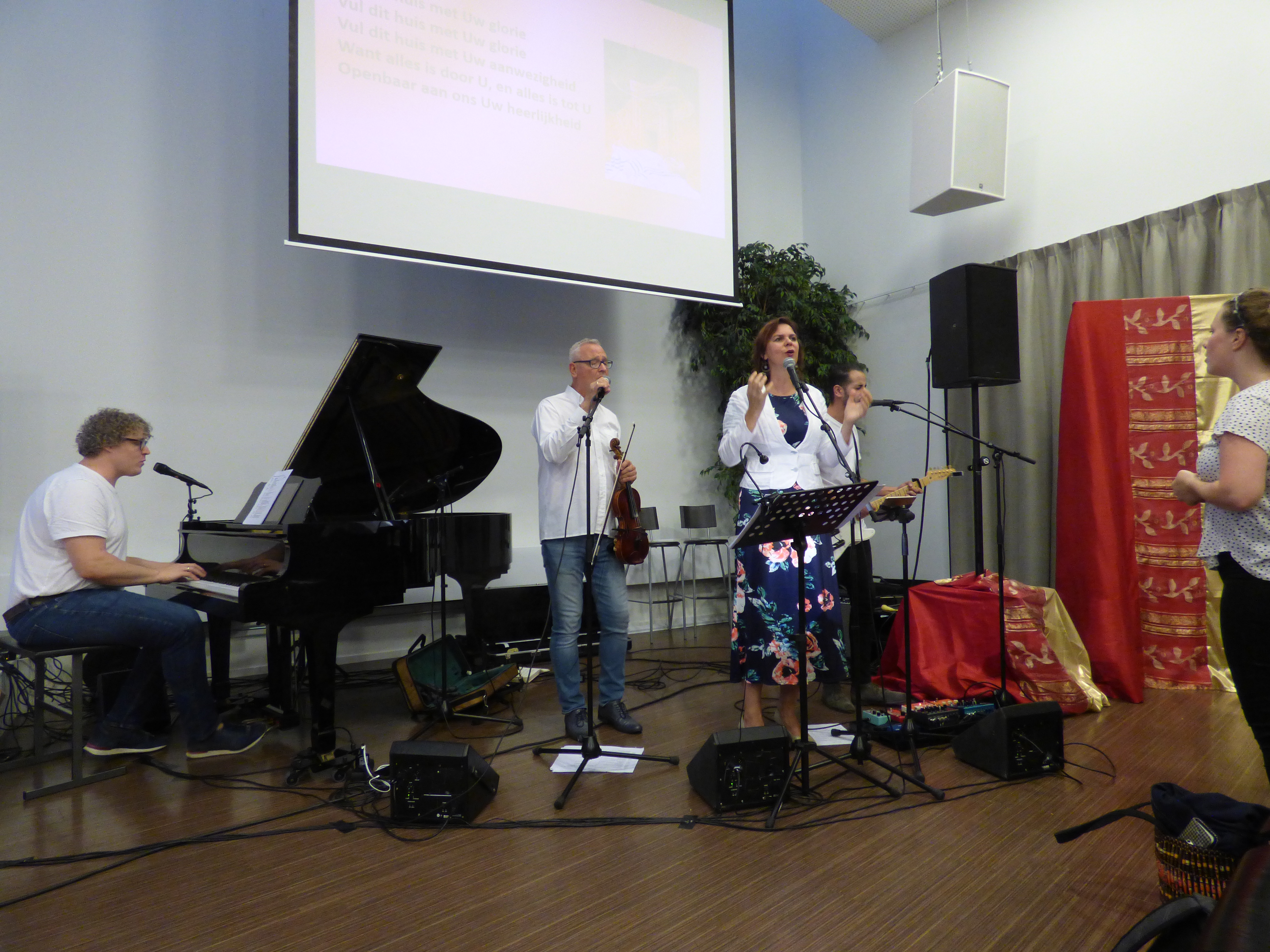 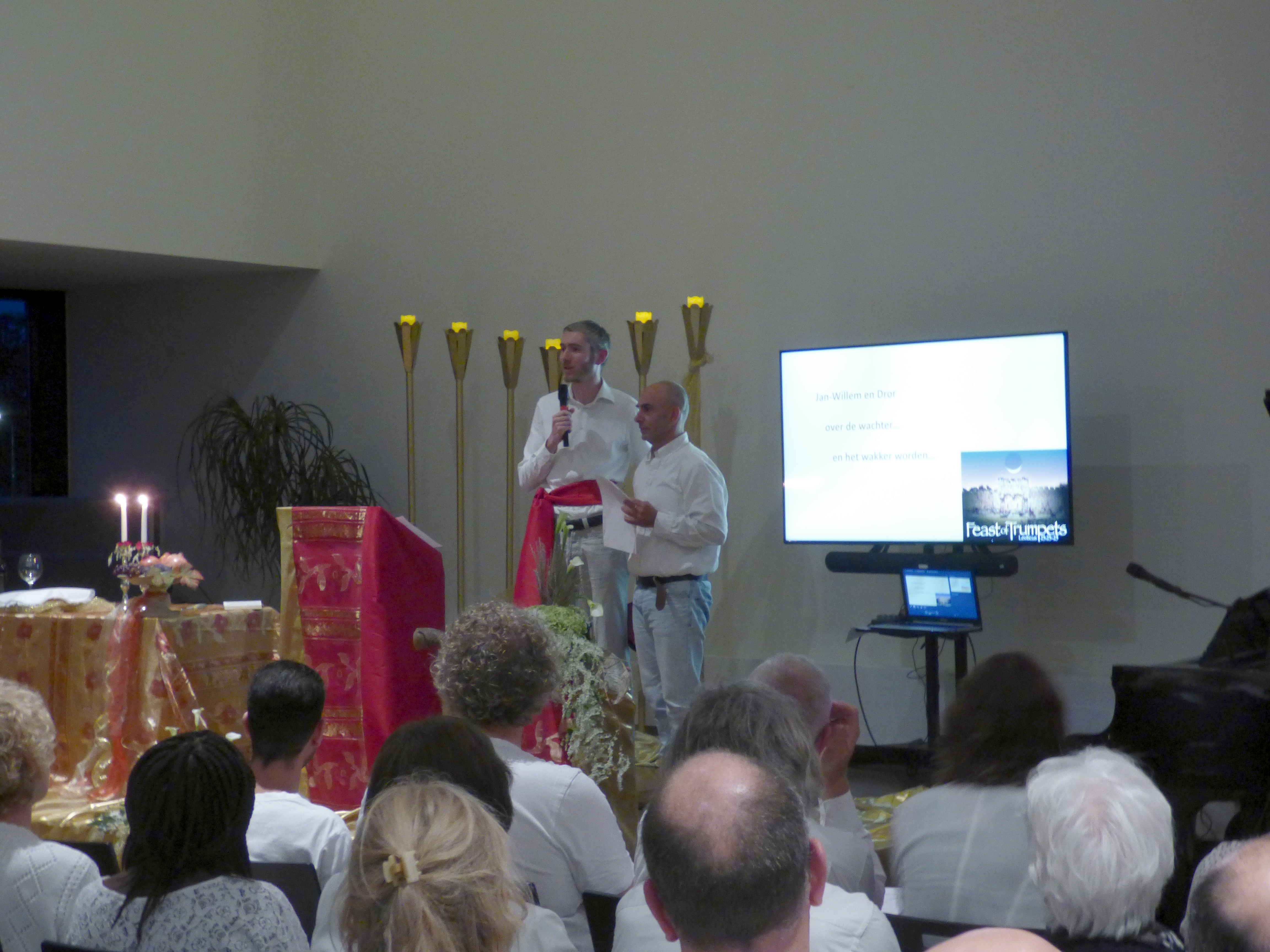 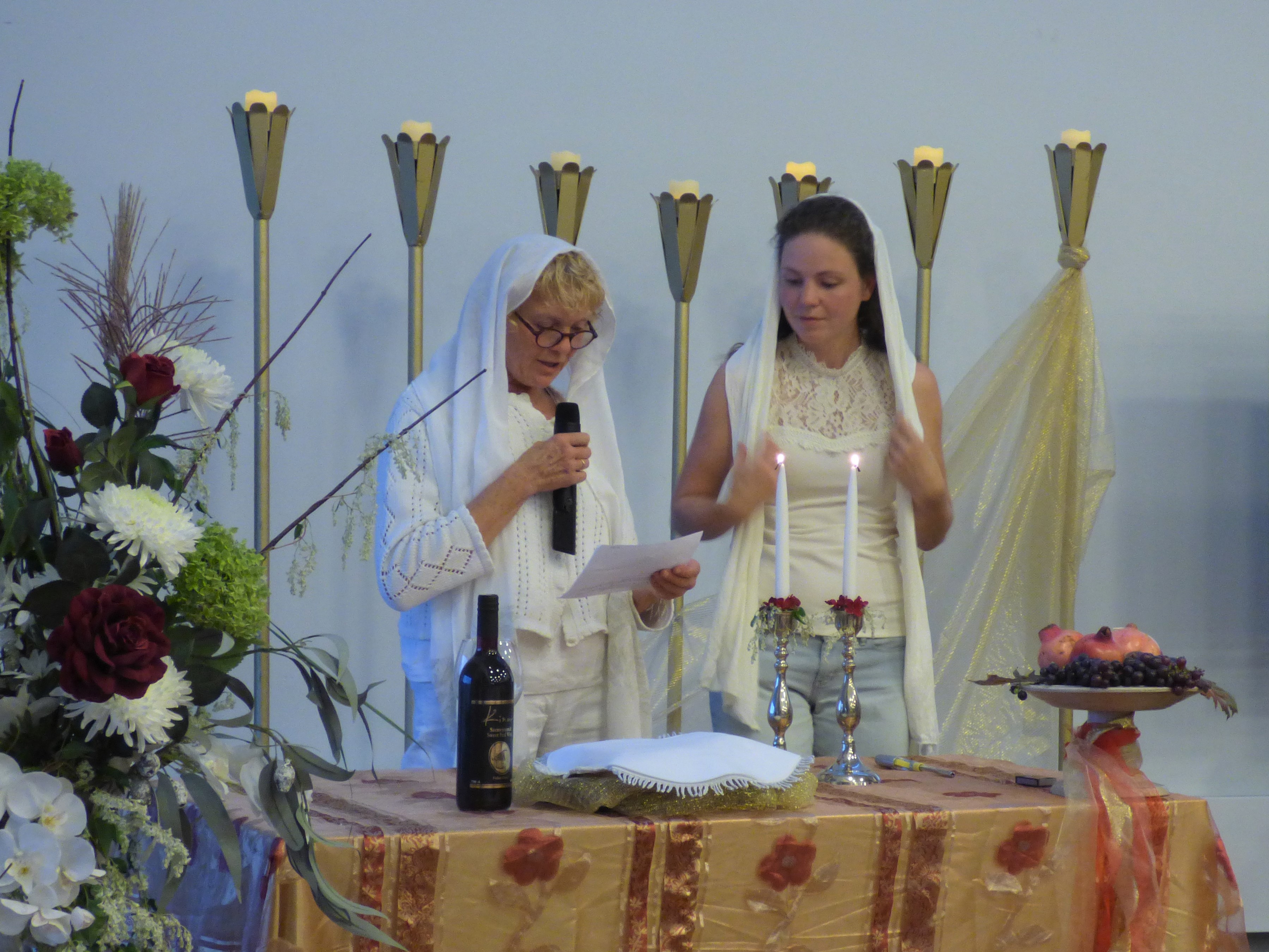 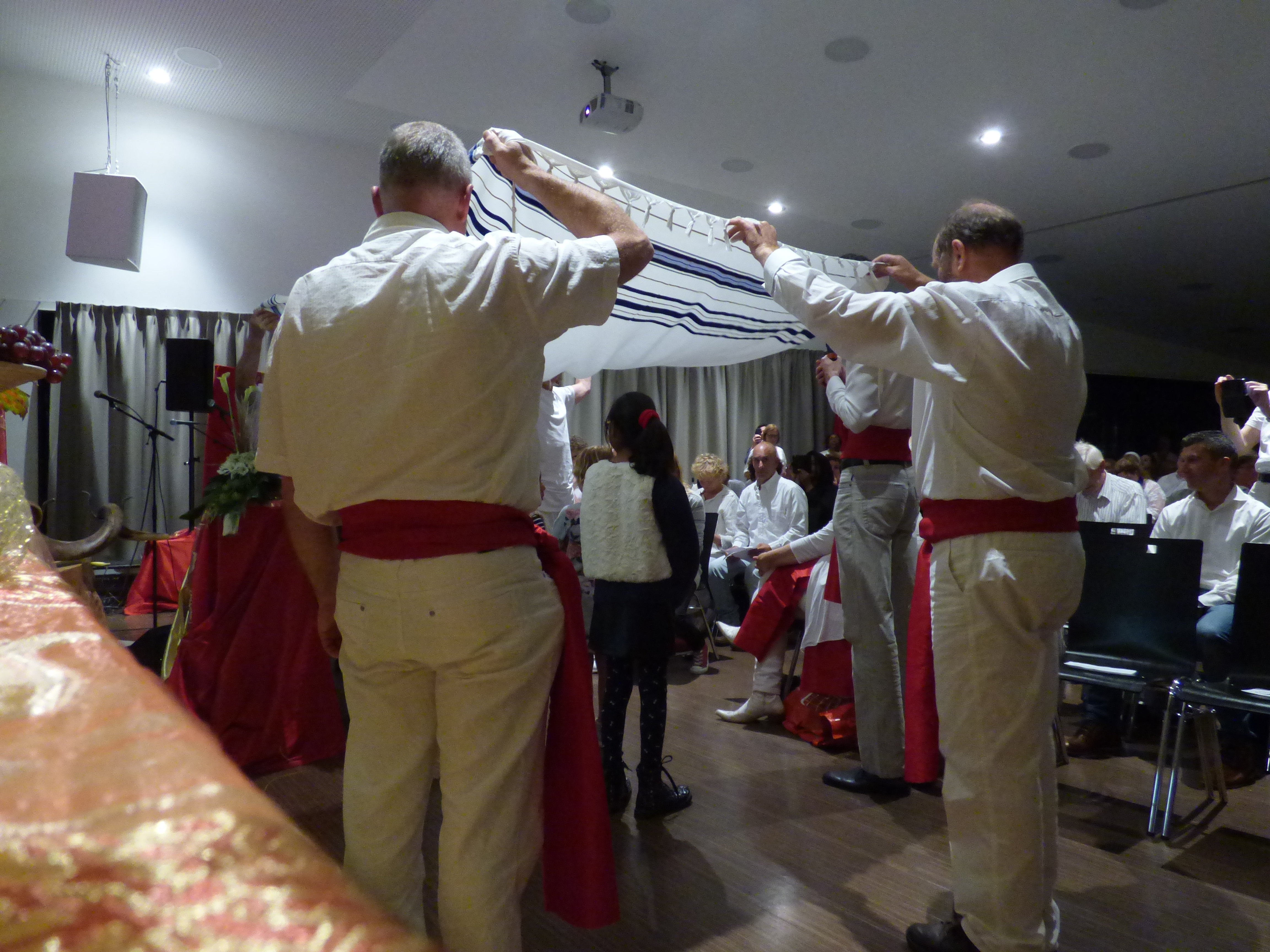 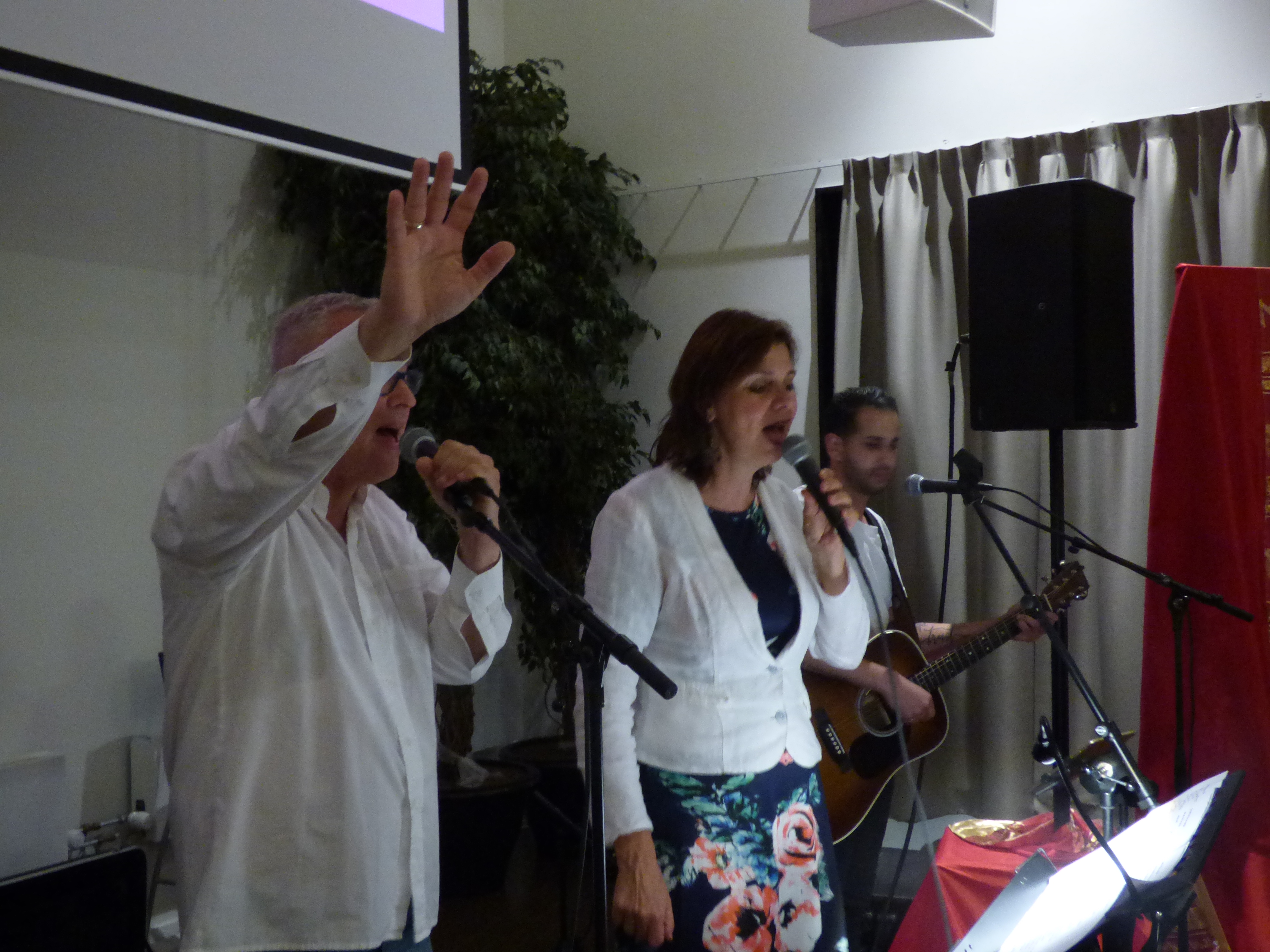 The hall is completely full, the tone is set and under the beautiful musical direction of Carin and Peter van Essen and Ricardo Asaf Balsma, the song Adonai, sounded like a prayer and longing for the arrival of Yeshua, “See how Jerusalem waits.” It actually reflected the meaning of this evening. We are looking forward to His arrival !! 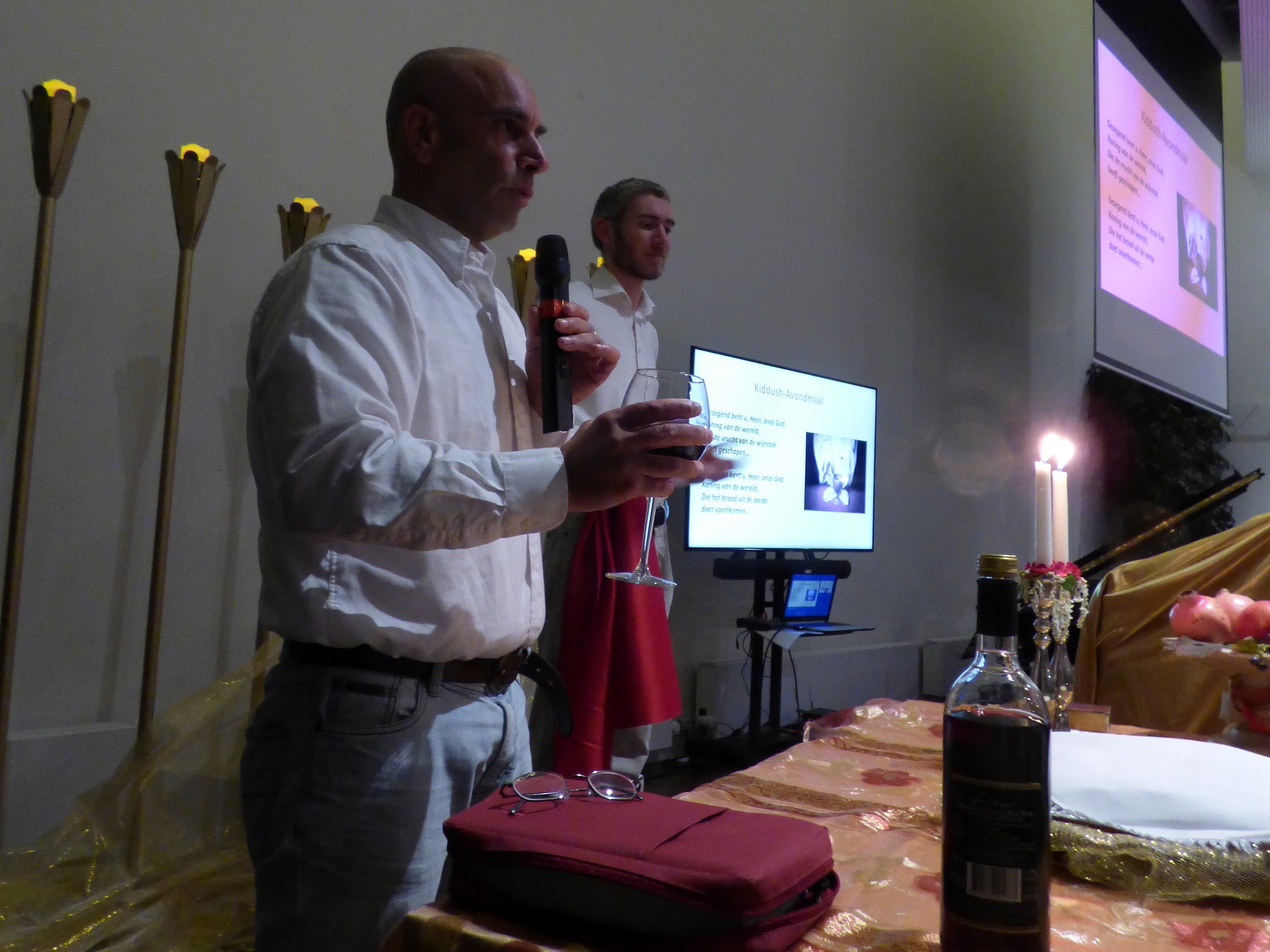 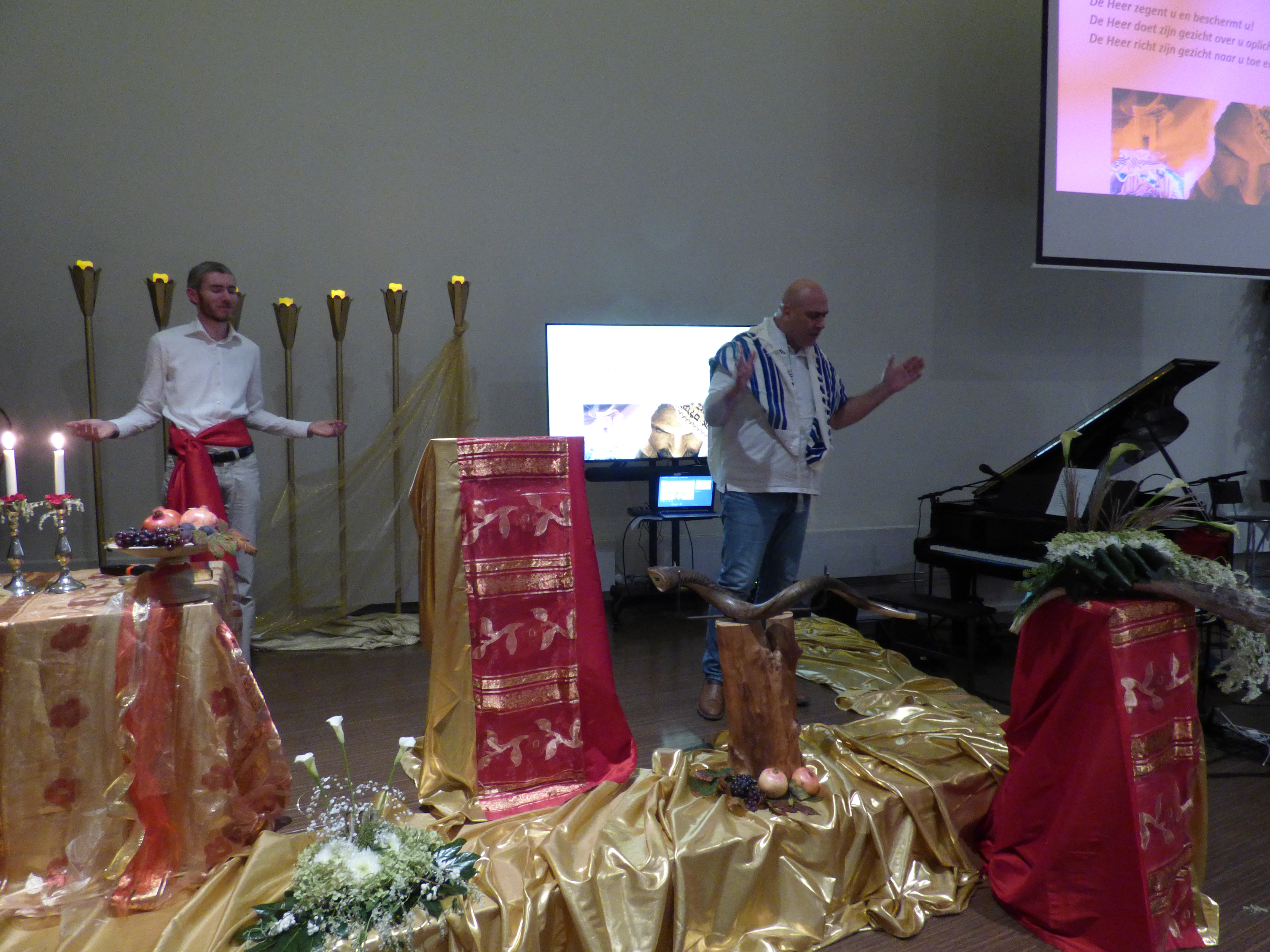 Jan Willem van den Bosch and Dror Shoshan taught, in turn, about the significance of the Feast of Trumpets, it was wonderful to learn from them…. We also celebrated this evening, as on a special Sabbath, with bread and wine. What was pointed out but now looking back to Yeshua, who gave His life for us. He is the basis of our joy, also this evening. He paid for our freedom. He made us His pure bride. We always want to be ready for Him. 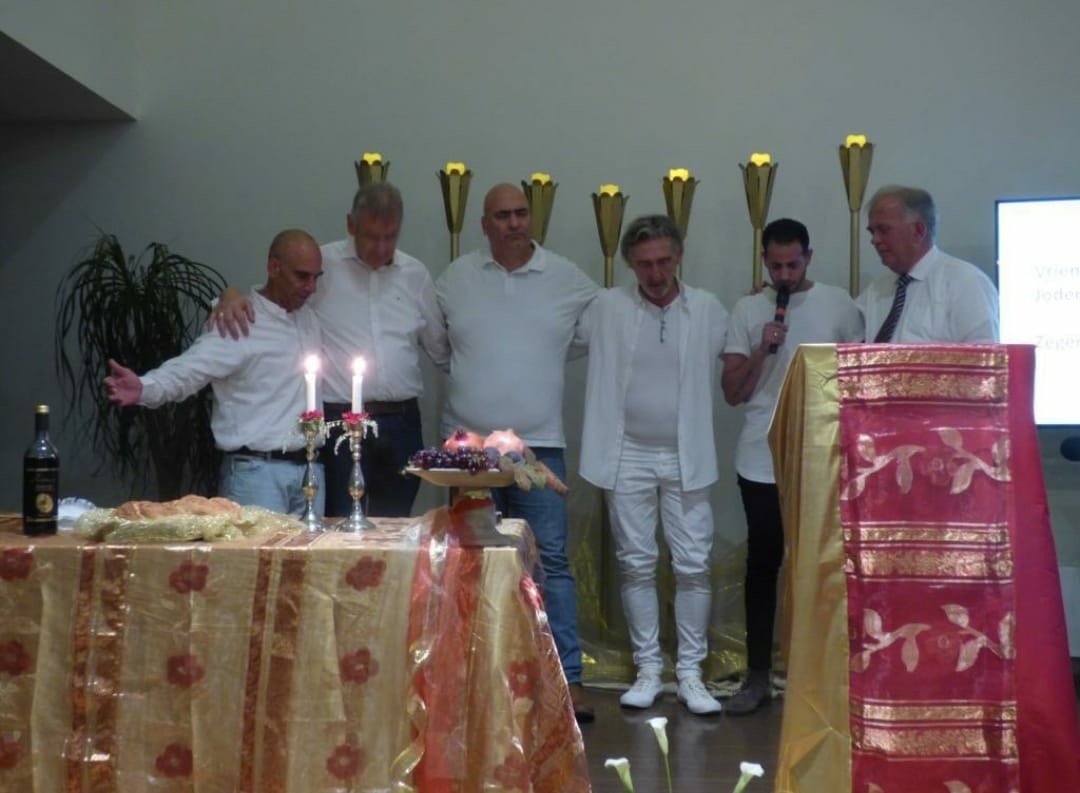 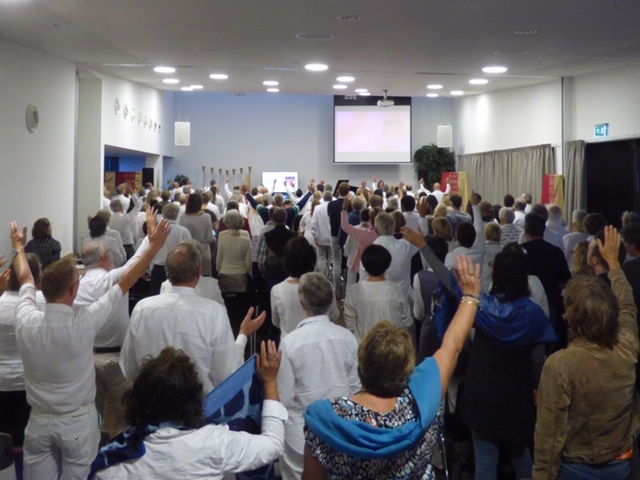 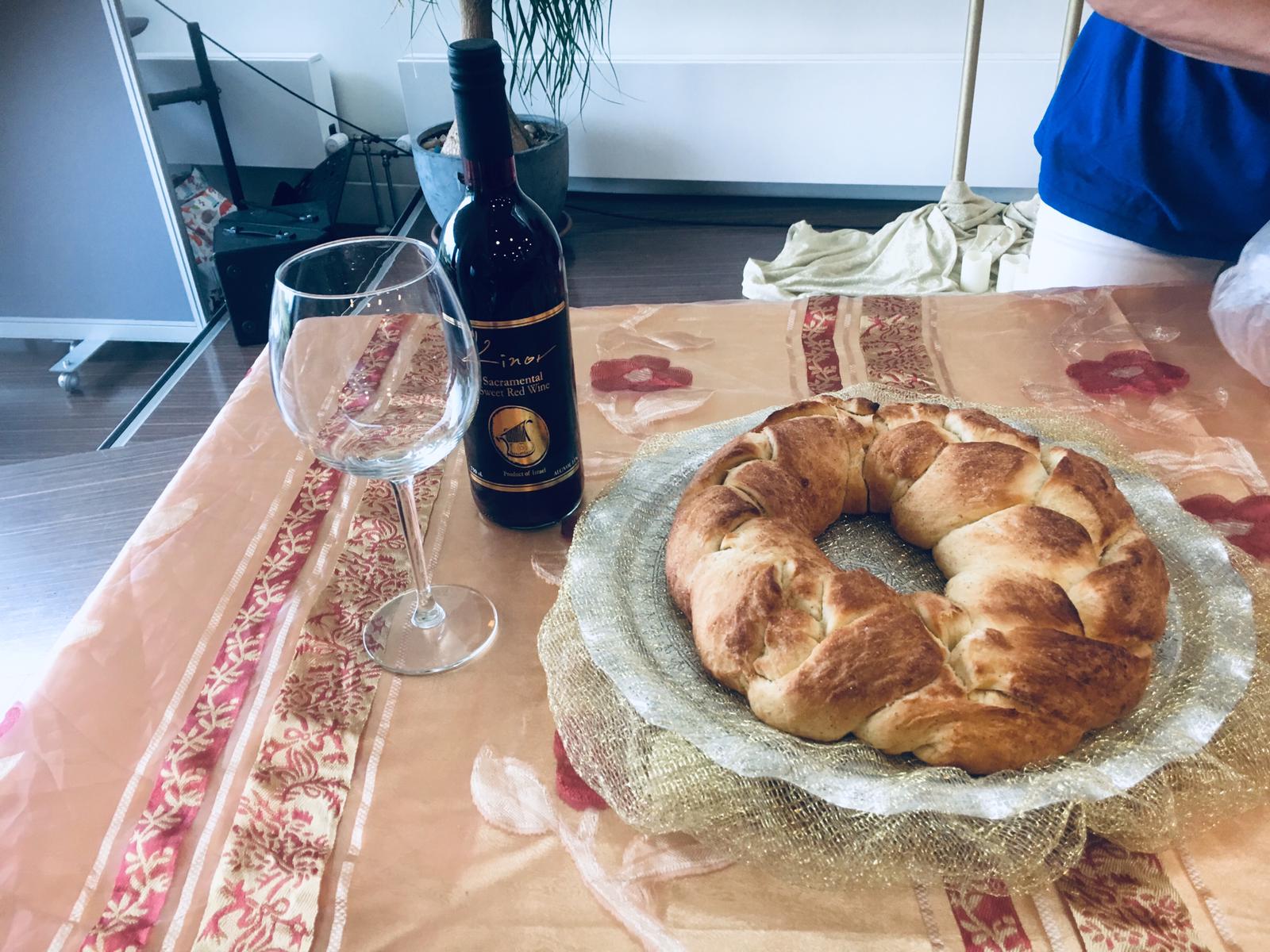 During the break we enjoyed fellowshipping with each other but also the sweet delights brought by everyone. Also the apples with honey were not lacking, as a blessing for much “sweetness” at the start of this new year.

A highlight and say, technical wonder, was our contact with the Plant Hope delegation in Israel: Jennifer, Eli and Limor, and another 11 people. It was great to have them live from Israel from the Mount of Olives in our midst, and to pray and sing peace, Shalom to each other. 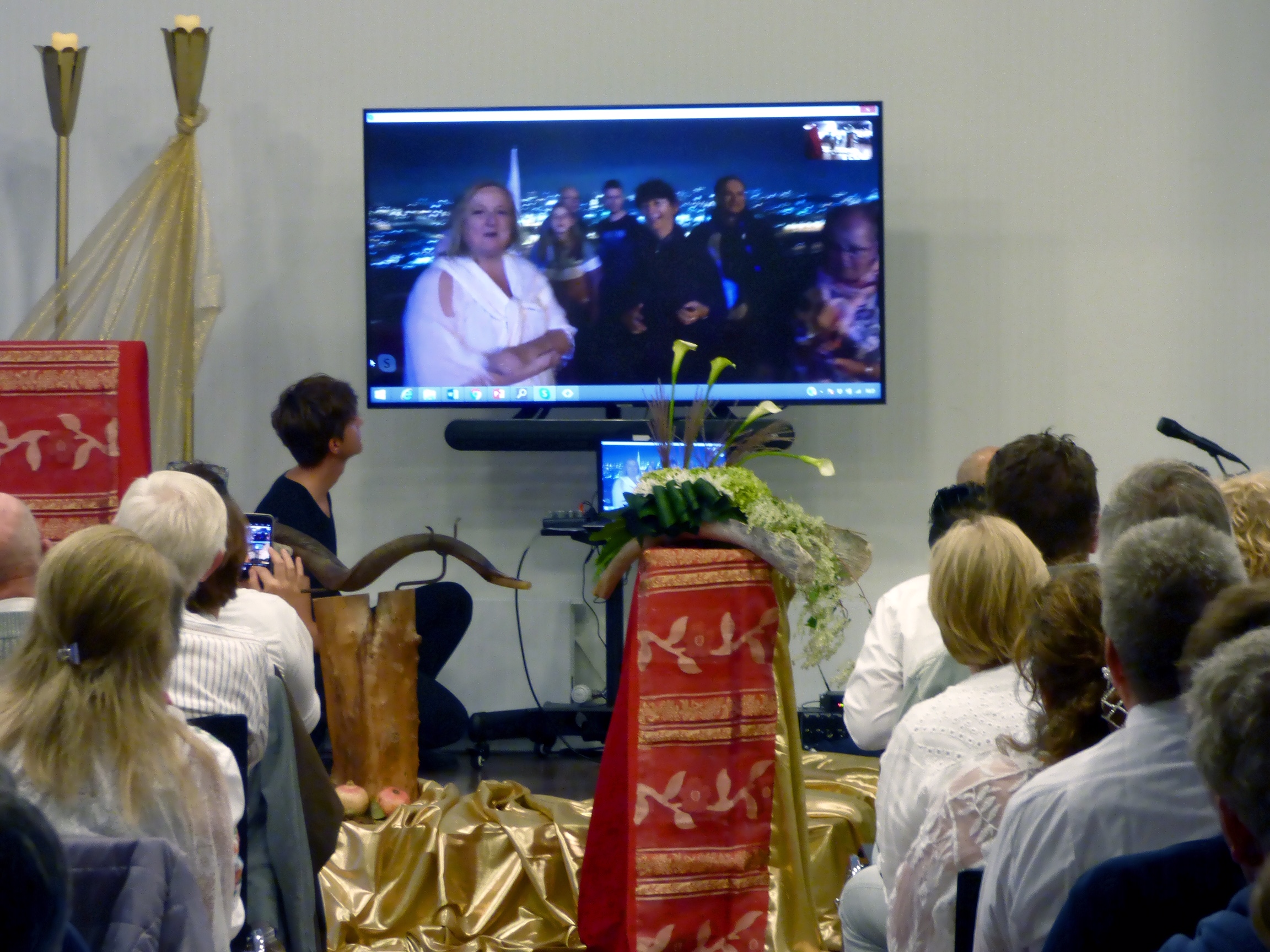 An important part of the evening was that as Christians and Jews we wanted to bless and encourage each other and learn from each other. There was also prayer for Israel and for Plant Hope and we were allowed to bless the children under the Chupa. The Word of God was read and the shofar blown, 4 x 25 tones, a total of one hundred, the last one being held extra long. With the last shofar blowing, the many participants who had brought their ram’s horn were allowed to join.
It was impressively beautiful..

A powerful, multi-colored sound and call to God. Blowing the shofar has great power in heavenly realms. God Himself has provided the shofar, He hears it.
The evening ended with thanksgiving, dance and praise.
Dancing in imitation of David, who was so joyful to God, because He, in the form of the Golden Ark, was in their midst. We ended this wonderful evening with the song: “The Days of Elijah”

– Verily He comes, King of the universe, with the sound of the shofar! – 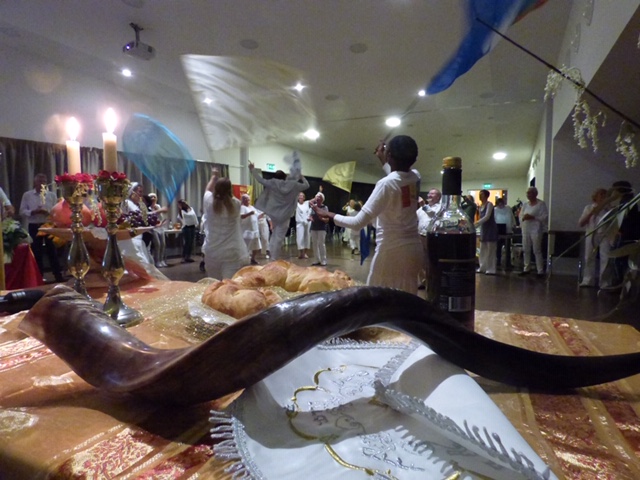 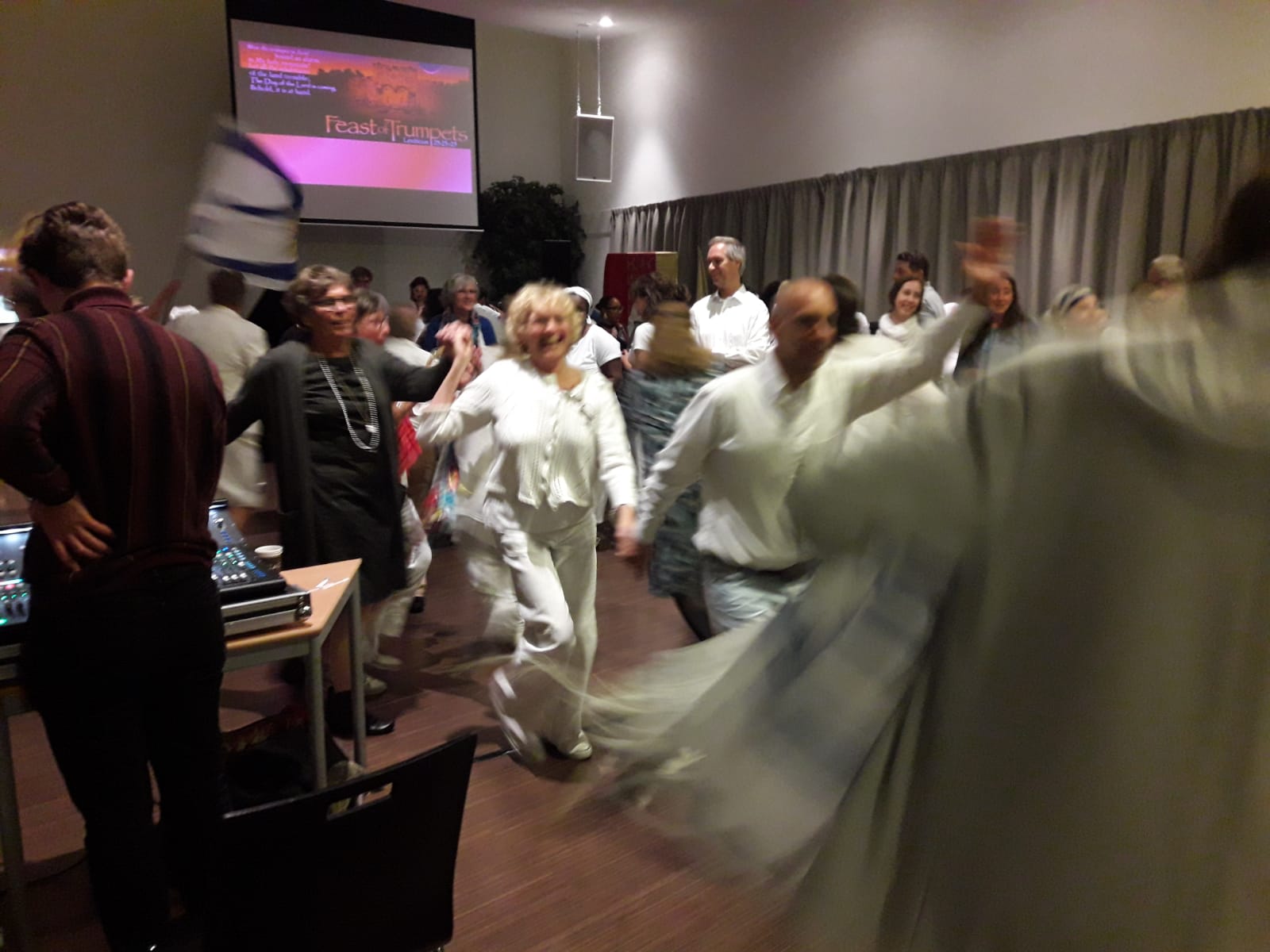 It was exciting … Until the last moment we were unsure whether it would work. We arrived in Israel late the night before. A small delegation from the Netherlands. More people joined us on the plane. The dream: to make a live connection from the Mount of Olives to Woerden, during the Feast of Trumpets. Building a real bridge between Jerusalem and the Netherlands at God’s appointed time.

Nowadays everything is possible with Skype and Facetime, right? But on the Mount of Olives there was no Wifi. However, our Christian taxi driver assured us: “It is a high mountain … there is definitely a connection!” 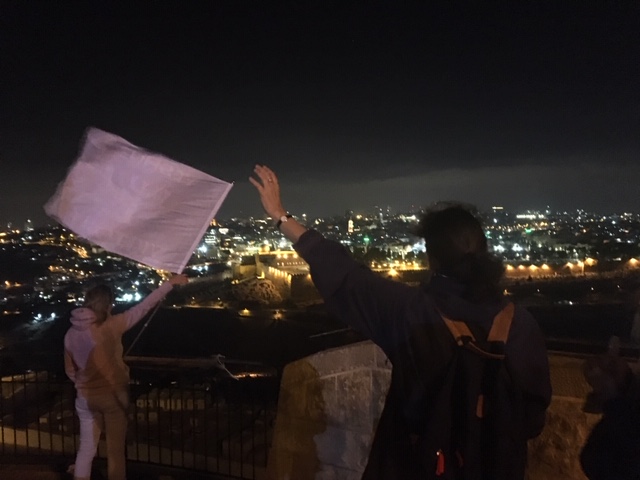 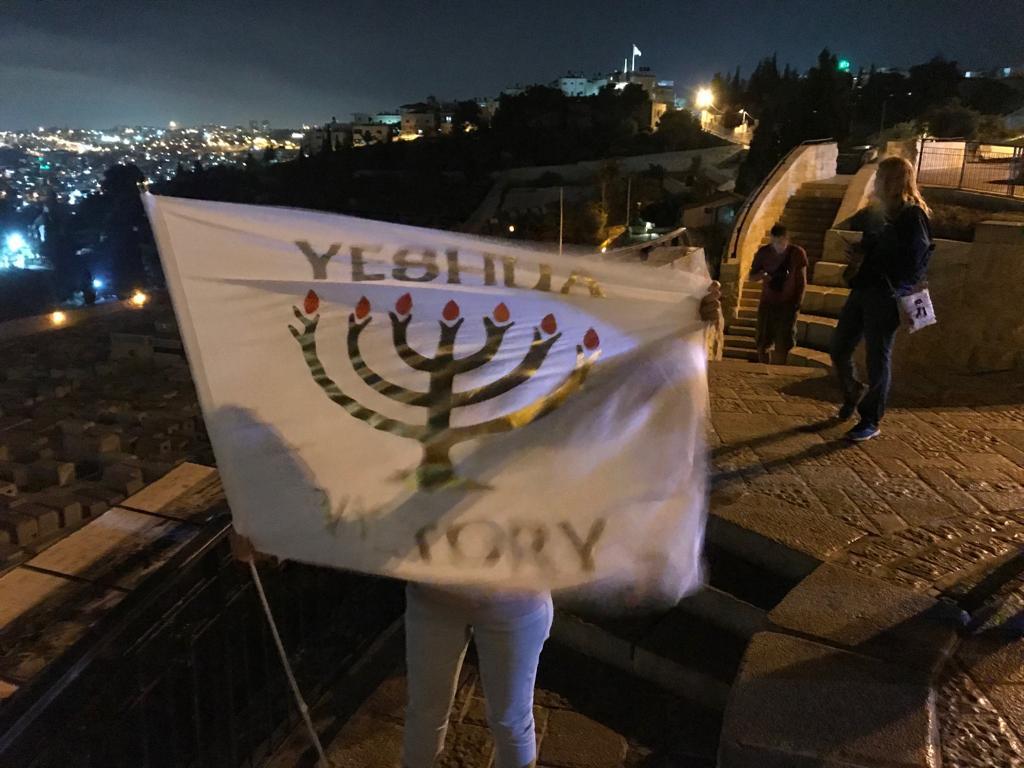 We were stuck in the old city until an hour before, praying that our telephones would work because Skype was not working properly and our batteries were quickly falling. More and more people joined us, and extra taxis had to be arranged. With 14 people we arrived on a dark Mount of Olives with a beautiful view of the Temple Mount. Breathtaking. While all of Israel was at home at a festive dinner, we were waiting to be allowed to blow the Shofar to wake people up to God’s glory.

Be alert! The king of glory is coming. We began to sing and worship our king: “Baruch ha Ba Beshem Adonai Yeshua” ((Blessed is He who comes in the name of the Lord ”, Psalms 118: 26, Matthew 23:39). Welcoming our Lord from Jerusalem … from the Mount of Olives. Yes Jerusalem is waiting! We are waiting for you Lord, Jews and Christians together in unity. Praise to the King of Kings… You are our everything.

I pointed to the small chapel a hundred meters away. That was the traditional place where the Messiah Yeshua ascended to heaven. From where two angels said that He would return in the same way. We laughed. One thing we knew for sure…. if it happened tonight we would be ready, and even people in the Netherlands could see him.

We waited in suspense if the phone with 4G would work.

And then finally the ringtone came … Woerden calling Jerusalem!

The image flashed on and we saw a large room with hundreds of people dressed in white on a small screen. It was so overwhelmingly beautiful that we had forgotten to prepare what we were going to say. We waved “Shalom” to the large group, our friends and family. Great smiles on their faces, and joy. Together we began to worship our king Yeshua and call upon Him.

In 2019, for the first time on the Feast of Trumpet on the Mount of Olives, the trumpet was blown, Yeshua’s victory was proclaimed, and even Elijah said, “See the Messiah coming.”

An exercise for the future, and a special prophetic day.