A supernatural day of God’s perfect timing, Shavuot and Pentecost

Was it coincidence that Pentacost and Shavuot were on the same day? 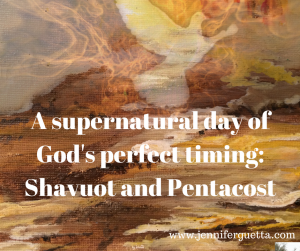 The Jewish holiday of Shavuot is the second of the three Biblical harvest feasts. It was celebrated widely during Old Testament and New Testament times and is still celebrated in Israel and among the Jewish people today. It is on Shavuot (the 50th day-Pentacost) that the Holy Spirit came down from heaven in Jerusalem on the disciples of Yeshua. Originally Shavuot and Pentacost were celebrated on the same day. However, today Jews and Christians celebrate it on a different day because in the 4th century AD the Roman Emperor Constantine separated the lunar and solar calenders. By doing this, he also separated the supernatural meaning of Shavuot from Pentacost.

Shavuot is also known as The Day of First Fruits or sometimes called the Festival of the Harvest. Traditionally we celebrate the harvest of the first wheat and therefore, on this day, we read the book of Ruth. A true love story, between a bride and a bridegroom that took place on the threshing floor. In Israel, Shavuot is known as the wedding day and as the birthday of Israel. On this day we also celebrate that God came down to earth and gave us the law on Mount Sinai. It was on this day that he supernaturally wrote the ten commandments. The stone tablets were a covenant between God and his people. In Judaism a wedding is sealed by an agreement, a Kettubah. The ten commandments are like a Kettubah between God and his bride Israel. Sealed by his love. For this reason, another name for the holiday is The Day of the Great Oath (wedding vows) and Shavuot is a time when we can renew our wedding vow to God and acceptance of God’s gifts.

A promise and a prophesy

But Israel worshipped other Gods and did not keep the covenant. Therefore God promised he would make a new covenant. “It will not be like the covenant I made with their ancestors when I took them by the hand to lead them out of Egypt, because they broke my covenant, though I was a husband to them,” declares the LORD. “This is the covenant I will make with the people of Israel after that time,” declares the LORD. “I will put my law in their minds and write it on their hearts. I will be their God, and they will be my people.” (Jeremiah 31:31-34). He also said to his bride Israel: “I will give you a new heart and put a new spirit in you; I will remove from you your heart of stone and give you a heart of flesh.

“On the birthday of Israel, the kingdom of God was born. God empowered mankind with his own spirit, the spirit of love.” 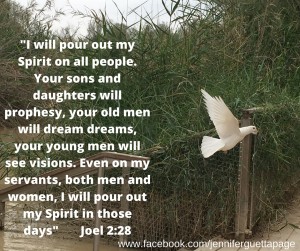 ON THIS EXACT DAY God came down AGAIN with fire and gave his people another supernatural experience! On the day that all Israel celebrated the first covenant Jesus fulfilled the prophesy by sending the Holy Spirit and writing the law of God in the mind and hearts of his people, just as Jeremiah had predicted.

The disciples were waiting in Jerusalem, most likely in a room in the temple (the house), on the ancient threshing floor. On top of mount Zion, the bride, received the promised spirit of God, the new Kettubah, as Ezekiel prophesied. “And when the day of Pentecost [Shavuot] was fully come, they were all with one accord in one place. And suddenly there came a sound from heaven as of a rushing mighty wind, and it filled all the house where they were sitting. And there appeared unto them cloven tongues like as of fire, and it sat upon each of them. And they were all filled with the Holy Spirit, and began to speak with other tongues, as the Spirit gave them utterance.” Acts 2:1-4

ON THIS DAY God fulfilled the old covenant and made a new one.

ON THIS DAY the kingdom of heaven on earth started, because God could once again commune with his people, and they with him, through the Holy Spirit which dwelled inside them. The messiah had come to announce the kingdom of God, just as predicted. God’s rule on earth was established. Everything in the gospels leads up to the day of Pentecost.

ON THIS DAY the tongues of fire separated and came to rest on each one of his disciples, showing that the time had come for God to make his dwelling with men. “Dwell” in the Old Testament is frequently rendered shakhan, derived from the same root as Shekinah, indicating the abiding presence of God. But God cannot dwell with that which is defiled and unholy. This is why God had to first make a final atonement for the sins of the world in order to sanctify a people for himself in whom he would dwell by his Spirit. The Messiah died for our sins to sanctify us so that the Holy Spirit could live inside us and we could commune with God again, like in Eden. This is the secret. We are his vessels, the holy grail. Your body is the temple of God. The Shekinah, the spirit of God, came to dwell inside our bodies. “The two became one”. This came into fulfillment on Shavuot.

THAT IS NO COINCIDENCE.

What are the chances of such SUPERNATURAL miracles happening on the same day? When Moses came down from the mountain he saw that the people had sinned and 3000 people were killed because they could not keep the law. When Peter received the Holy Spirit he spoke and 3000 people were redeemed from their sins. Coincidence? Or God’s perfect timing? Only God could have planned this so perfectly. In Judaism Shavuot is also known as the “The holiday of completion” for this was the end of God’s perfect plan that he would fill all mankind with his spirit and could commune with them once again, as in Eden. His spirit would flow from them, one to another, like a river of life, and his kingdom would rule on earth forever.

TIME IS IN HIS HANDS

“These things I have spoken to you while being present with you. 26 But the Helper, the Holy Spirit, whom the Father will send in My name, He will teach you all things, and bring to your remembrance all things that I said to you.” John 14:36-26 (NKJV)

“And I will ask the Father, and he will give you another advocate to help you and be with you forever— 17 the Spirit of truth. The world cannot accept him, because it neither sees him nor knows him. 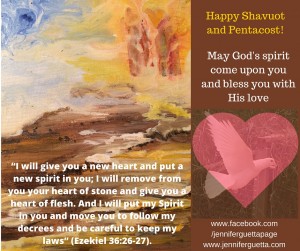 “But very truly I tell you, it is for your good that I am going away. Unless I go away, the Advocate will not come to you; but if I go, I will send him to you.” John 16:7

“He said to them, “Go into all the world and preach the gospel to all creation. 16 Whoever believes and is baptized will be saved, but whoever does not believe will be condemned. 17 And these signs will accompany those who believe: In my name they will drive out demons; they will speak in new tongues; 18 they will pick up snakes with their hands; and when they drink deadly poison, it will not hurt them at all; they will place their hands on sick people, and they will get well.” Mark 16:15

“You are witnesses of these things. 49″And behold, I am sending forth the promise of My Father upon you; but you are to stay in the city until you are clothed with power from on high.” Luke 24: 48

“But the Advocate, the Holy Spirit, whom the Father will send in my name, will teach you all things and will remind you of everything I have said to you.” John 14:26

“Exalted to the right hand of God, he has received from the Father the promised Holy Spirit and has poured out what you now see and hear.” Acts 2:33

“Exalted to the right hand of God, he has received from the Father the promised Holy Spirit and has poured out what you now see and hear.” I Corinthians 6:19

“Don’t you know that you yourselves are God’s temple and that God’s Spirit dwells in your midst?” I Corinthians 3:16