Dear Church, Do you have the courage to be like Esther and stand up for Israel?

Purim, the feast of Esther is a celebration of tremendous faith in the God of Israel and courage to stand up for His people… even in the midst of growing hatred.

We are living in a time where, to my dismay, the Jewish people are once again faced by growing anti-semitism. Some stories seem to repeat themselves over and over again thoughout history…. especially the Biblical ones. And that is not surprising since Paul said the Biblical Holidays are a “shadow of things to come…” (Colossians 2:17). Yes even Purim, the feast of Esther. Nowadays Purim-The Feast of Esther-is a joyous holiday celebrated by Jews all over the world.

But did you know that the book of Esther is also seen by many as a prophetic story about the Church and the Jews in the end times? Esther was not only the last book of the Taanach that was canonized, it was also the last holiday before the end of the original Biblical year and has therefore often been compared with the “end times.”

The Book of Esther is an amazing story of great courage. It takes place in ancient Persia-Iran about 400 BC. The Jews of Iran had a good life, until one day the evil Hamam comes to power and convinces the king to try and kill all the Jews. 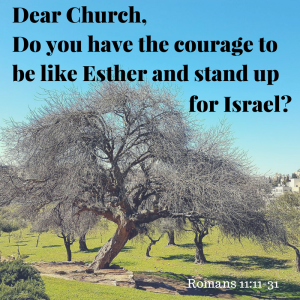 Esther, is a beautiful young girl, who finds favor in the kings eyes. At the risk of losing her own life, she goes to the king, and pleads for her people. In the end, the king destroys Hamam, who is hanged at the gallows, and the Jews are saved.

So how is this story also a shadow of things to come? Like Esther, who is an orphan raised by Mordechai, believers have also been grafted into the olive tree of Israel (Romans 11:11-31). The church, like Esther, is mainly located outside Israel and is also hiding her Jewish roots. Through the blood of the Messiah, believers have favor with the King of Kings (Yeshua-Jesus). Through the Messiah, they, like Esther, have soaked in the perfume and oil of the Ruach ha kodesh-The Holy Spirit- for many years, waiting for the moment they can step out. During the time of Esther, the devil wanted to use Hamam to destroy the Jewish people, just as he uses anti-Semitism today. Like Esther, the church has a direct relationship with King Jesus (Yeshua) and can go to him and pray and ask him to spare the Jewish people. Like Esther, the church is asked if they have enough courage to stand up for Israel… even at the risk of their own life.

We are living in a time when anti-Semitism is growing once again. But all around me I see Christians afraid to stand up for Israel for fear of offending their neighbors. They believe the Bible is 100% the Word of God but when modern day Israel is mentioned many still doubt the Jews are the same children of Israel as mentioned in the Bible. However, if the Bible is true… and it is… then so are God’s promises to Israel. “But as regards election, they are beloved for the sake of their forefathers. For the gifts and the calling of God are irrevocable.” (Romans 11:28, 29). Many Jews can trace their families history all the back to Biblical times, and can show you they are still the same children of Israel. In fact, the existence of Israel today and the Jewish people, shows that the Bible is very real…

The Jews are still the Jews, the same children of Israel as they always have been and always will be. So with everything that happened in history why has Hamam (anti-Semitism) been tolerated once again by the west? It is a sad thought. In the West we tolerate so much… but if we tolerate anti-Semitism, it will take advantage of us; for just like Hamam, it has its own evil agenda.

So this is the real question: Do you believe the Bible is every word the Word of God? Even if it’s fulfillment is taking place in front of your eyes? Is Israel still Israel to you or not? The church holds a special position in the end times.

You are like Esther, the Kings beloved. You have been basking in the Holy Spirit for much longer than a year! Hamam is back in the land, trying to spread hatred of the Jews and Israel. Do you have courage to stand up for your God and His people? Will you have the courage, like Esther did, to go to your government or pray to your king and plead for the people with whom you have been grafted in the olive tree? Even if the world turns against the Jews and Israel… will you plead their cause with your government… at the risk of your own life? Would you be willing to help your Jewish friends even if gangs came looking for them in your neighborhood?

Do not be afraid to plead for His people even when it is difficult! Have faith in the God of Israel and His Son the Messiah Yeshua! He will prevail. I pray to God, in this time and age, that Christians will have the courage to be like Esther and help the Jews and Israel.