A Hanukkah Message for the Church in the End Times

There is a great lesson in the story of Hanukkah about spiritual warfare for the church today. The story of Hanukkah is about standing up for God, saying “NO” to assimilation and living in the offensive instead of the defensive against your enemy in order to take back the kingdom.

As with many Biblical holidays the lessons of Hanukkah are a shadow of things to come and illustrate how the spiritual world works. Living in Messiah means all these physical stories become spiritual. Indeed history repeats itself, in the physical world and the spiritual realm.

Hanukkah takes place between the “Testaments” (the covenants). Daniel prophesied about it in the Old Testament (Daniel 11:21) and the Messiah, Yeshua-Jesus, celebrated it (John 10:22). 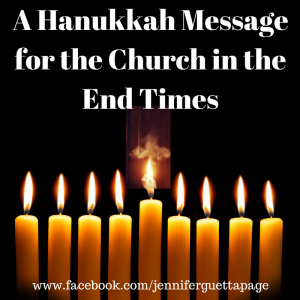 On Hanukkah we celebrate that light wins over darkness, the Light of the world, the rededication of the Temple, standing up for your beliefs in difficult times, the fight against assimilation, we celebrate God’s miracle power and that His oil keeps flowing. Hanukkah is also related to the end times, the church and the tribulation and the anti-Christ.

This is the story: In 165 BC the Jewish people in Israel were living in the defensive and persecution was terrible. Antiochus Epiphanus wanted everyone to assimilate and take on the Greek culture. He forced people to worship Greek Gods or die. 40,000 Jews were slaughtered in a terrible gruesome manner, another 40,000 were taken as slaves. Epiphanus has often been compared with the Anti-Christ. Those that stood up against him were killed. Many Jews assimilated, hoping evil would go away by itself. But assimilation made it even worse. Epiphanus conquered the temple and desecrated it.

The tides turned in 165 BC when one small family of priests said “NO!” we are not going to assimilate. We are going to worship our God only. They believed in faith and said: “Our God is Mightier!” They stood up in the face of evil and started living in the offensive instead of only on the defensive. They grabbed what weapons they had and started fighting to take back the country. At first they suffered many losses, but slowly people started to join them. Their weapons were not always physical, for they had very little real weapons. They prayed and fasted and called upon God. Instead of sitting at home and waiting to defend themselves against the Greek Army, they went into the offensive and attacked the enemy! And God granted them favor and answered their prayers. In 167 BC they reconquered the Temple and defeated the Greek army. When they found the Temple, they saw that it was completely desecrated. They cleansed it, and put on the light of the Menorah. But there was only enough oil for 1 night. God multiplied the oil and it lasted for 8 days.

Ancient Menorah’s found in Israel from the Roman period and later.

Through this story we can see the strategy of the enemy, in the end times…. It starts with assimilation. In the last decades many people in the church have assimilated, saying: “It doesn’t matter. Evil will go away by itself. We don’t have to stand up for the Bible, otherwise we will be separated from society. We can integrate other God’s into our religion. We just want peace, so we can accept all other Gods.” The story of Hanukkah shows that evil doesn’t go away by assimilation and tolerance. Peace is not brought about by allowing other God’s into your country. The enemy only comes to steal, kill and destroy. Assimilation with other religions and tolerance of things unbiblical has not helped the church. In fact, in the last years there has been a great falling away, and the churches became smaller. Just like the story of Hanukkah, as the church becomes smaller, the enemy will come and persecute those remaining, and try to conquer their temples (bodies) and desecrate them. The remaining few feel attacked from all sides. Indeed this is what is happening in the church right now. Everywhere I go I hear people say: “I’m being attacked”, my health, my finances, my friends. At prayer meetings we are mostly praying for protection from evil and help in overcoming each individual attack. Some Christians have even stopped praying for fear of being attacked by the enemy.

Indeed Hanukkah has a great lesson for the church today in the end times. We know we are not fighting against flesh and blood, but against an invisible enemy of darkness: who is very real! The Lord has given us many weapons, for defense and offensive, in order to take back the Kingdom. Like the Maccabees, as long as we sit at home and live in the defensive we will not overcome! The enemy will keep coming at us, until we start standing up for our God and say: “NO! l will worship God and go and set the captives free.” What Judas the Maccabee did in the physical realm, the church is called to do in the spiritual realm: start living in the offensive, instead of the defensive. If you only live in the defensive you will be attacked continually. The darkness will keep attacking until you are weak and give in to him. To defeat him we must go in the offensive.

Ancient weapons from the time of Hanukkah. (Israel Antiquities Authority)

Derek Prince writes this about the offensive: “a French general once said: ‘In a war: which army wins? The one which advances….’”. He then says: “As long as Satan keeps the church on the defensive, his kingdom will never be overthrown”. The church MUST be on the offensive…. “Jesus promises us that if we obey Him as our commander in chief, we will be able to move out, storm Satan’s citadels, break through the gates, release his captives, and carry away his spoil” (Derek Prince, Spiritual Warfare, 2013, pg. 90, 92).

It is time to reclaim the Temple and start striking the devil, instead of waiting for him to attack us. Israel would not have won if Judah the Maccabee did not stand up against the Greeks. Pick up your weapons and attack the enemy, and set the captives free! Reconquer the Temples, cleanse them, and pray to the Lord for grace to refill our oil and multiply it and let great miracles happen.

How do we start living in the offensive? How do we attack the enemy and break his lines? We pick up the weapons that God has given us and do what Jesus told us to do: “Go and tell the world about what he has done! Heal the sick, cleanse the lepers, cast out demons.” Offensive weapons are: Prayer— Praise—Preaching – Testimony. Pray against the enemy, worship and praise your God, preach and tell your story, your words need to go out! Instead of proclaiming what the enemy has done start proclaiming the great deeds that Jesus has done. Know you are a child of God and what God has given you as an inheritance. Speak the name of Jesus out loud with honour, speak about the blood of Jesus and tel your testimony, put on your armor (Ephesians 6), pray and fast, Stand strong in faith, use God’s word and pronounce it out loud! Put all your thoughts on him, and set the captives free.

Tell people around you what Jesus has done for you, and pray for them. Bless them by speaking God’s light over them. Stop assimilating, and discussing theological issue’s and start fighting in the spiritual world for your God.

I pray that the story of Hanukkah will inspire Christians to stand up for God, that they will stop assimilating and stop living in the defensive and start fighting the enemy. But in all things, remember this is the Lords battle, not yours, he will give you your victory. Trust in him completely. Ask God to fill your temple with his oil: the Holy Spirit and let your light shine before men. Remember, in the end, it is God’s miracles which saved the nation of Israel, also during Hanukkah. God gave a miracle of conquest and they overcame. And then he confirmed this with another miracle in the Temple.

The real deliverance came, after the men started living in the offensive and started using their faith and trusting in God’s delivering power. 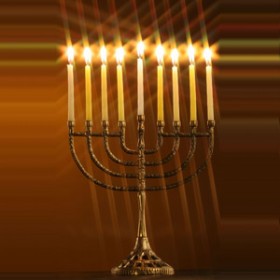 More information about the history and meaning of Hanukkah

A Vision for Jerusalem on Hanukkah

For the Duch version of this article click here.