A Day of New Beginnings: Nisan 1

by Jennifer GuettaFeb 24, 2013Blog Article, Feasts, Messiah IN The Feasts

Today is the start of the priestly year in the Bible! It is the Alpha of the Omega. The day of new beginnings, a day of rebirth, a day when light came into the world and started casting out the darkness… a day of breakthrough! Nisan 1 is the first day of first month of the biblical priestly calendar.

On this day God created the universe and the spiritual world. According to the Bible on this day, the Tabernacle was erected in the wilderness and dedicated. 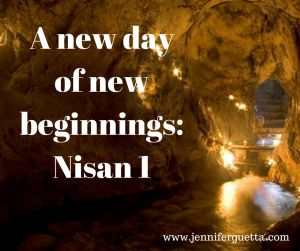 This was the day that God’s glory came into the Tabernacle to dwell with people on earth. For this reason, many people have said that this is also the possible original birthday of the Messiah-Yeshua- because it is the day God’s glory came and tabernacled with men.

The 1st of Nisan also marks the beginning of the month of the Exodus and redemption from slavery. On this day, God gave Moses instructions about Passover, promising him that salvation is coming! It is a new beginning for all men. However it is also the day Hamam cast lots to exterminate the Jews, which God later turned around on the proving only God controls our destiny and time and has a plan of Salvation. It is no accident, that the Messiah Yeshua died on the 14th day of the month of Nisan, defeating the darkness and bringing hope and salvation to the world.

But more things happened on this amazing day. In the Bible kings counted their years of reign, according to this day. Interestingly it is also the day Ezekiel cleansed the Temple and Jews all over the world read Ezekiel 45:16-46, about the Prince and the offerings in the Temple.

On the evening of the 27th of March 2017 we will celebrate the 1st of Nisan of the year 5777, which is probably a Jubilee year. The Jubilee is the 50th year of restoration, freedom, a year of the remission of sins and universal pardon. There are scholars who believe that the original Jubilee year starts on 1 Nisan. So this is an exciting day!

Tonight I pray that a new beginning will be made, breakthrough will come and that a year of salvation and redemption will start. I pray that God’s Glory will tabernacle with us and in us, and that many people will be reborn and know the Messiah-Yeshua, who is the alpha and the omega, the beginning and the end. He is the light that came into the world and conquered the darkness, through him we can be restored with the father, so that mankind can walk with God again in Eden and commune with him and know him.

and may His REIGN start now…